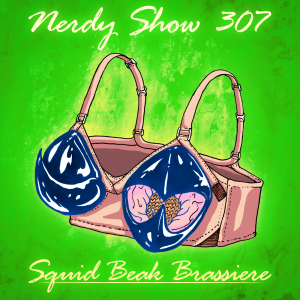 Our present is the future – and the future is a beautiful pandemonium of science so surreal that even the strangest jokes can come true.

Like what, you ask? Tesla coils at a hockey game, vitamins for frogs flavored like bugs, swarms of drones foiling the FBI, squid beak meta-material being used to make bras. Which of those are real and which of those are Nerdy Show discussions gone awry? Find out when Cap, boR, Jon, and Nicky team up and go peculiar as they recount their latest adventures and the weird “sci” that’s not necessarily “fi”. boR tries out the HTC Vive Pro to see if it lives up to his superhuman eyeball needs and looses himself in Accounting +. Cap share’s the journey so far with hormone replacement therapy and the power of choosing their own form. The gang discusses Avengers Infinity War. Oh, and Scale Watchers – those guys show up too.