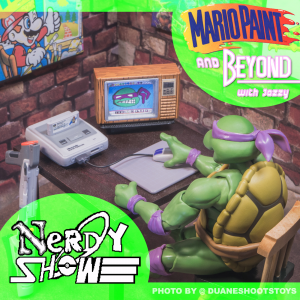 Once upon a time there was a short-lived era of gaming based specifically around empowering the user to create. The era of Mario Paint – a console game that came with a mouse, explained how to interface with your VCR, and had full illustration, music, and animation suites… all for the Super Nintendo. It’s the best-known, but it wasn’t alone.

In this episode, Cap, Brandon, and Jon team up with Fangamer’s Jazzy Boho to discuss the obscure genre of creative games. These “games” blurred the lines between children’s entertainment and art applications and were made to empower users with tools only limited by their imagination and ingenuity. We share stories of software both awful and awesome from the era of 90s gaming when just about anything was possible. Their day may be done, but the legacy lives on! Jazzy is an avant-garde animator who uses Mario Paint in ways heretofore unknown to humankind – she shares some of the secrets of making her surreal and hilarious videos as well as some other retro tools of the trade.