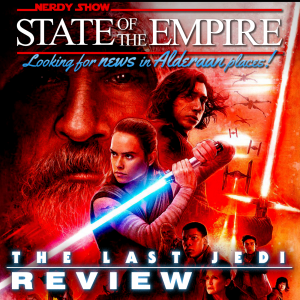 Here at State of the Empire, we make it a habit of staring into the abyss and divining secret Star Wars truths; but when we heard a rumor that this was going to be the most decisive Star Wars movie of all-time… we shrugged it off. We’re shocked to say that the prophecies came to pass and that we’ve found ourselves caught in the middle of the true star war: was this movie good or bad?

This Last Jedi review is one forged from years of speculation, fan love, sharply-honed critical skills, and a deep need for three friends to come together and attempt to bring balance to their warring psyches. The irony that this film about light and dark has polarized us and indeed the entire Star Wars fanbase is not lost on us. Join Matt; the dissenter, Doug; the voice of hope, and Cap; the moderate as we unpack our extreme conflict, dissect the film’s struggles both in-world and cinematic, and look to the future, hoping to discern just what this film means for the future of Star Wars – not just from a narrative perspective, but as a franchise.