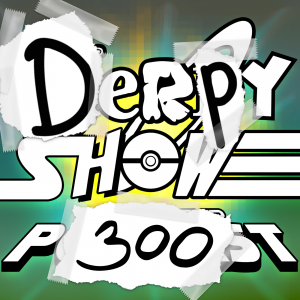 What’s happening here?! The Derpy Show crew has reunited to host this special episode of Nerdy Show. If you replace the entire crew of a show with that of another, is it even the same show anymore? Find out as we answer that question, and learn what DJ Snorlax, Robojoe, Neofaust, and boR have been up to for the past 2+ years.

You probably want to know what else is in the episode… well too bad! You’re just gonna have to stop reading this and listen. Seriously. Let’s just say you’re going to love it. Let’s just say your expectations will not just be met, but exceeded… Neofaust brought portable synthesizers. That’s all you’re getting. Happy 300th episode.