State of the Empire :: Episode 40 :: Scavenging for Jedi Secrets 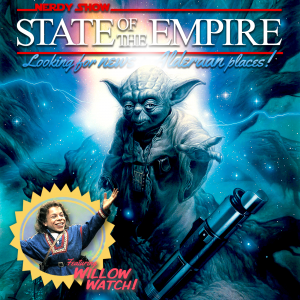 The release of The Last Jedi looms large – and we’re shocked by how little we know about what’s to come. One thing’s for sure: Disney is IMPRESSED. In this episode we share reactions and discuss the ramifications of director Rian Johnson being given his own standalone Star Wars trilogy. We also use some ancient Jedi secrets to uncover possibilities of what might be in store for us in the new film. No, really – We consult an early draft of The Empire Strikes Back which shares some eerie similarities with what we’ve seen so far and hints to the intense, character-defining struggles to come.

Join Cap, Doug, and Matt for a shockingly revelatory, Supremacy-sized episode of State of the Empire. Beyond the films we dig into new ways the comics and novels are uniting the disparate eras, further Battlefront II scandal, and return from a trip to The Last Jedi‘s Crait – the new destination just added to Star Tours!