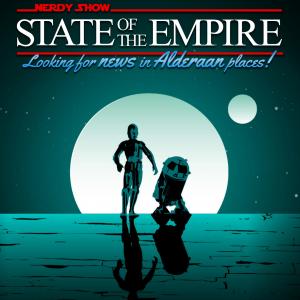 Star Wars novels have long been the heart of the galaxy far, far away. This “lived in” sci-fi universe is inevitably left fans dying to know more about its mysteries and covet action figures of obscure aliens from the back ground of Mos Eisley. Now that so much of the expanded universe has been swept away, the pressure is on for new books to step up and fill in the blanks!

In this episode Cap, Matt, and Doug discuss the latest Star Wars novels and how they’ve build on the bigger themes being explored in the new films. We also give you a run-down on what’s happening in Star Wars comics present and forthcoming. The connective tissues between the stories of the Original Trilogy era and the New Trilogy are getting stronger as is our depth of understanding about the duality of The Force, the cuckolding of Greedo, and the canonicity of The Star Wars Holiday Special. We also learn how single player campaign for Battlefront II is deeply rooted in exciting stories from across the timeline and get deep into a game industry discussion that casts a critical eye to all the drama coming out of EA games.