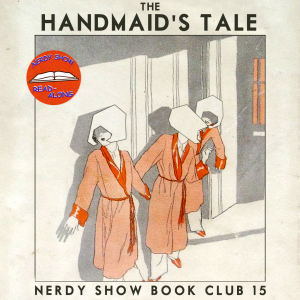 From the pages of Nerdy Show – it’s Nerdy Show Book Club! In these literary episodes, we share what we’re currently reading, do dramatic readings from the best and worst nerd literature, talk with notable geek authors, and discuss a book we’ve read along with the community.

This episode is dedicated entirely to Margaret Atwood’s landmark dystopian novel, The Handmaid’s Tale. It’s a horrifying story that gets closer to reality with each passing day – in which America has been overthrown by religious fundamentalists and anyone not male, white, and heterosexual is killed or subjugated. We experience this awful reality through the eyes of a woman trapped in sexual servitude; her existence reduced to being a walking womb to compensate for the future’s low birth rate.

Join Cap, Denika, Jess, and Brandon for an overview of the novel, a dramatic reading, and then spoiler-intensive discussions on both the book and the recent television adaptation. We discuss the challenges of the world, and the narrative itself, as well as the novel’s massive cultural impact, parallels in our own reality, and even manage to make some jokes to soften the blow of how hard this book hits.