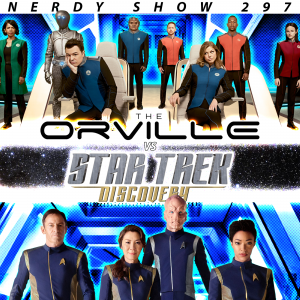 This season of television you’ve got choices when deciding where to boldly go. Option A: Seth MacFarlane’s The Orville; a Galaxy Quest-style, Roddenberry-fueled sci-fi comedy. Option B: Star Trek: Discovery; a darker slice of Trek set in the new movie continuity. Option C: BOTH?!

Join Cap, boR, Trench, and Doug as we weigh the pros and cons of both series. The very fact that we have two high-caliber, space-faring shows at once after such a long time without anything Trek-flavored is hitting us with one heck of a displacement wave! We also review Blade Runner 2049, the long-lost SNES title Star Fox 2, and discuss the confusing news surrounding MegaBots, peculiar home archeology, and more!