Posted by NerdyShow on September 6, 2017 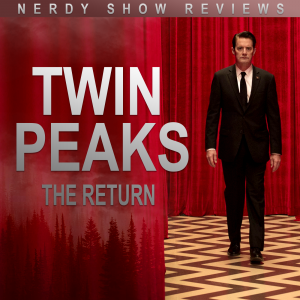 Looking for a spoiler-free review of Twin Peaks – The Return? Well sorry, folks – there’s no such thing. Tune in to the first couple minutes to hear the broadest of discussions of our thoughts on the revival series, and then buckle up. After we cross the spoiler wall you’re going to want to have seen all of the series or the strange desire to be even more confused than the average Peaks fan.

This summer we took a vacation, more of a road trip really – we spent more time than expected in Las Vegas and middle-of-nowhere North Dakota, but most importantly we returned to a small town in Washington where strange things happen. It was a wild ride; one that we could never have predicted, and now that it’s over we need to decompress. Cap is joined by Peaks-pal, Consequence of Sound‘s Mike Roffman, for a support group-like unpacking of all the mirth and horrors we’ve witnessed.