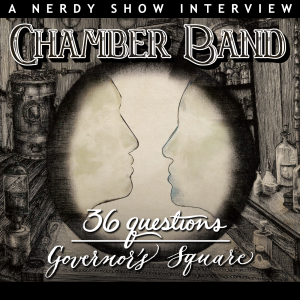 Chamber Band have made it their mission to emotionally disarm you while exploring beloved nerd worlds. In their debut record, Deities, they cheekily adventured through Dungeons & Dragons, in Careers they braved The Hunger Games, and now in Governor’s Square they’re taking on H.G. Wells’ The Time Machine and The Invisible Man. However, in all cases it’s best you check your preconceived notions before venturing further. Love, loss, and existential but infinitely relatable quandaries await you – and with those universal themes, captivating music. This is no mere fanfiction; Chamber Band cuts their source material to the core.

Join Cap and vocalists/ songwriters Chris Littler and Ellen Winter as they explore the new record and how it fuses two beloved sci-fi classics into one potent narrative. But that’s far from all Chamber Band has been up to – they’re the writers behind the podcast smash-hit 36 Questions! Hear about how this musical/ audio drama hybrid came to be, the challenges of drastically changing up both formats, and getting props from the creator of Hamilton. We also debut a new track and unleash an unheard rarity from the archives.