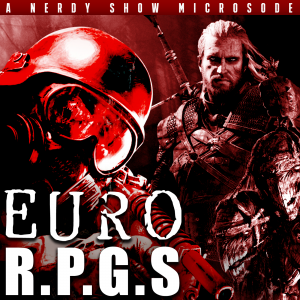 Where you’re from greatly influences who you are – especially so when it comes to creative output. So it should be no surprise that for indie game studios out of Eastern Europe, the stories they tell and the games they make are distinctly different from the usual faire: games like Metro 2033, S.T.A.L.K.E.R., Gothic, and others.

Cap, Trench, Arkais, Luke, and Tony explore their favorite titles in the often overlooked, sometimes obscure, and always fascinating world of European RPG video games. We look for what makes these games decidedly different (outside of a lack of major corporate funding), discuss the books that inspired them, share our personal highs and lows, and, of course, spend plenty of time talking about the best known title of them all, The Witcher.

Thanks to Sebastian Schlingmann