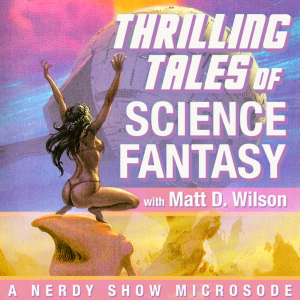 In-between hard sci-fi and hard fantasy lies a land where robots and unicorns play; so holster your laser pistol and put the spurs to your dragon, ’cause in this episode we’re exploring the ill-defined expanse of science fantasy. This genre is home to critically-important pillars of pop culture like Star Wars and basically every super hero universe, but where’s the dividing line? At what point is advanced technology that’s like magic actually magic?

To help answer this question, Cap, Jess, and Flame On!‘s Bryan are joined by Matt D. Wilson – author and co-host of comics podcast War Rocket Ajax. We share our favorite examples of science fantasy from across all mediums, discover some surprising candidates, and explore sub genres of the sub genre. We also discuss Matt’s current Kickstarter project to fund his new comic: Everything Will Be Okay – a satire about every conceivable apocalypse happening at once. But… is it science fantasy…? Discover the answer within!

Thanks to Dr. Talos for this episode topic!