Review: The Once and Future Queen #1 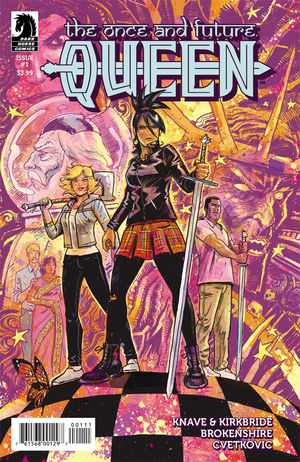 The One and Future Queen is a miniseries published by Dark Horse Comics. Presented by the creators of Amelia Cole, writers Adam P. Knave, D.J. Kirkbride and artist Nick Brokenshire.

An intriguing gender-bent twist on The Once and Future King. While that novelty can often feel forced, this one doesn’t at all. There’s a pleasantly diverse cast, and, no, you’re not imagining the spaceman on the cover.

The Once and Future Queen could easily be a lazy remix. Make “King” Arthur a girl, maybe Guinevere a boy and suddenly you’ve got a “fresh new spin”. Instead, it’s surprising how non-pandering this debut issue is. Knave and Kirkbride are ingenuous in their storytelling; writing believable characters set in an unbelievable world. 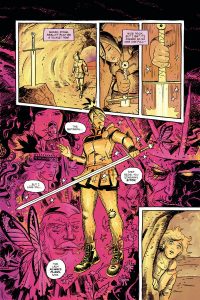 Rani Arturus is a 19-year-old chess prodigy, visiting England with her parents for an international chess tournament. After a disappointing loss, Rani wanders along the coast, questioning her future as a chess player. Then, like the start to many hero stories, she accidentally stumbles into her destiny.

Hidden within a cave is Excalibur. Pulling the legendary sword from the stone, Rani cements her place as queen and rightful wielder of the relic. She soon finds herself swept into a world of magic and swordplay, fighting with creatures she never knew existed among friends she never knew she had.

The writing duo do an excellent job establishing characters, their motivations, and environment throughout a single issue. While the dialog can feel stilted at times, the issue’s quirky, quippy moments more than make up for it. (Aside: Listen, I’ll admit I’m partial to eccentric wizards *cough*Dumbledore*cough* but man, oh man, Merlin is brilliantly written.) The two also pen a diverse cast of characters, from different ethnicities and sexual orientations, without a heavy hand or stereotyping lens.

Artist Nick Brokenshire also more than pulls his weight visually. His illustration has a depth and attention to detail that leaves you pouring over each page and his colors pop with exciting dynamism, while shadowing villains to look truly devious.

This is definitely a series to keep an eye on. Quirky, fun, and delightfully diverse, Knave, Kirkbride and Brokenshire promise a heckuva a ride across this fiove-issue miniseries.

The Once and Future Queen #1 is on sale today at your favorite local comic book shop, or digitally from Darkhorse directly. You can also always support Nerdy Show by purchasing a digital copy from Amazon.