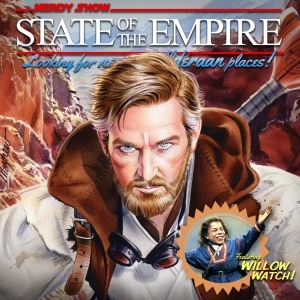 Like the Death Star, Rogue One looms ominously just beyond our atmosphere. We’re starting to see the shape of it, but the film’s air of mystery persists, even with new trailers and teasers. While there’s still new news about the film to share, it’s the rest of the Star Wars universe keeping us busy as we eagerly anticipate December 15th. Between comics, the novel, Ahsoka, and the happenings in Star Wars Rebels, a new narrative is appearing in the galaxy: the return of Obi-Wan Kenobi.

Join Cap, Doug, Matt, and Colin as we follow new clues. Much like how mention of kyber crystals seeded in books and TV led us to the imminent threat in Rogue One, we’re seeing deeper explorations of The Force as we approach Episode VIII… and all paths point to a small hut on Tatooine. But, as the new Star Wars galaxy expands, is it falling apart? We’ve got a lot to discuss – and that’s just the Star Wars part! We’ve also got one of our longest Willow discussions in ages with a new hope straight from Ron Howard and exciting insight into the film via Phil Tippet’s prop archives.