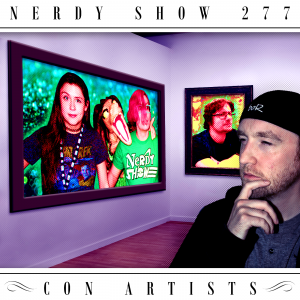 Ah, conventioneering – the excursion of choice for the modern nerd. With 2016 at an end, our crew’s traveling days have wrapped and we’re excited to share the last of our adventures in geeky parts unknown. Cap reports in from North Carolina Comicon, where DC Comic’s Young Animal imprint took over, and fancy donuts flowed like wine. Nicky shared her experiences at Blizzcon – the con dedicated exclusively to the games produced by Blizzard Entertainment and the legions of fans who worship them.

Meanwhile, boR returned to his homeland where soda is called “pop” and Jon lost himself in the absurdly detailed VR flight sim, Elite Dangerous, while keeping tabs on some truly remarkable innovations in gene splicing. All that plus the future of Stargate, the problems with continuing Blade Runner, and a review of the stunning sci-fi feature, The Arrival.