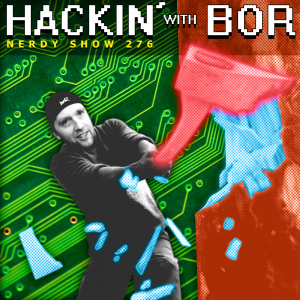 When life gets you down, there’s always rad media and good friends to help you through the tough times – and we’ve got both!

Join your pals at Nerdy Show for our two cents on the latest games we’ve been playing, tech we’ve been hackin’, and movies and TV we’ve been watching. Well, most of your pals anyway. Cap’s gone to North Carolina Comicon; leaving boR, Trench, Tony, and Doug to run amok in the Nerdy Show studio unsupervised.

What did the gang think of Marvel’s first foray into the mystic arts with Doctor Strange? Is Skyrim‘s re-release worth your hard-earned dough? How do Titanfall and Dishonored‘s sequels measure up to their predecessors? Is any surprise that Tony’s bony ass thought the 90s comedy Heavyweights was a laugh-filled romp? (It isn’t.) And just how much stuff can boR hack? Clearly these are the most important questions of the day.