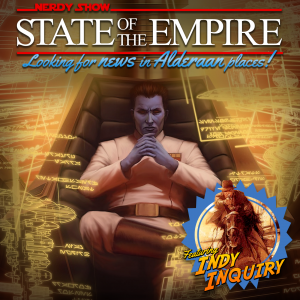 Season 3 of Star Wars Rebels is here and with it the return of one of the most revered characters in the series: Grand Admiral Thrawn. Hear our thoughts on how this Star Wars legend fared in his on-screen debut and reintroduction to the cannon. But Thrawn is only one facet of the changes and troubles facing the Rebellion: a mysterious Force-sensitive creature, a Sith holocron, foreboding owls, Ezra’s bad haircut… We take on all of it; both spoiler-free and behind the blast doors, for those brave enough.

Rebels isn’t the big news – Rogue Friday is almost upon us! Soon the Rebellion’s agents will be infiltrating retail stores across the world – but some secrets have already been leaked. We’ll be back for a merch-filled episode of State of the Empire next week, but for now Cap, Matt and Doug pour over what we know about the forthcoming film. Join us for theories on the next Star Wars animated series, more confusing quotes from Bob Iger, assorted speculation for Episode VIII and Han Solo, and more.