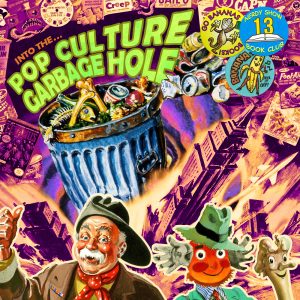 From the pages of Nerdy Show – it’s Nerdy Show Book Club! In these literary episodes, we share the books we’re currently reading, do dramatic readings from the best and worst nerd literature, talk with notable geek authors, and discuss a book we’ve read along with the community.

When you consume a ton of media, it’s inevitable that you’ll come face-to-face with some tentacle-waving garbage monster of obscure pop culture. The question is: is it bad bad or good bad? Will you find surprising brilliance to unnecessary direct-to-video sequels of classic films? Can a blatant sampling of the best-known sci-fi media of the past 30 years provide a fresh perspective? Real monkey/ typewriter/ Shakespeare kinda stuff.

Join Cap, Colin, Denika, and Brandon as they plummet into the recesses of the pop culture garbage hole: an inevitably frequent stopover for any nerd with a media addiction. Our Read-Along Book for this episode is Ready Player One author, Ernest Cline‘s Armada. Can this modern day retelling of The Last Starfighter (and many other nerd staples) stand aside his dazzling debut? We also dabble in dystopian fiction, discuss the metaphysics of simulation theory as told by a thought-form entity, and read from a young reader adaptation of Mortal Kombat: the movie.