It’s that time again, friends. The time where legions of nerds descend on San Diego for five days of pop culture mania. Cap & Jess will once again be your eyes and ears on the convention floor, braving crowds, waiting in lines, and pounding out words on our keyboards — all to bring you the latest in nerd entertainment news. 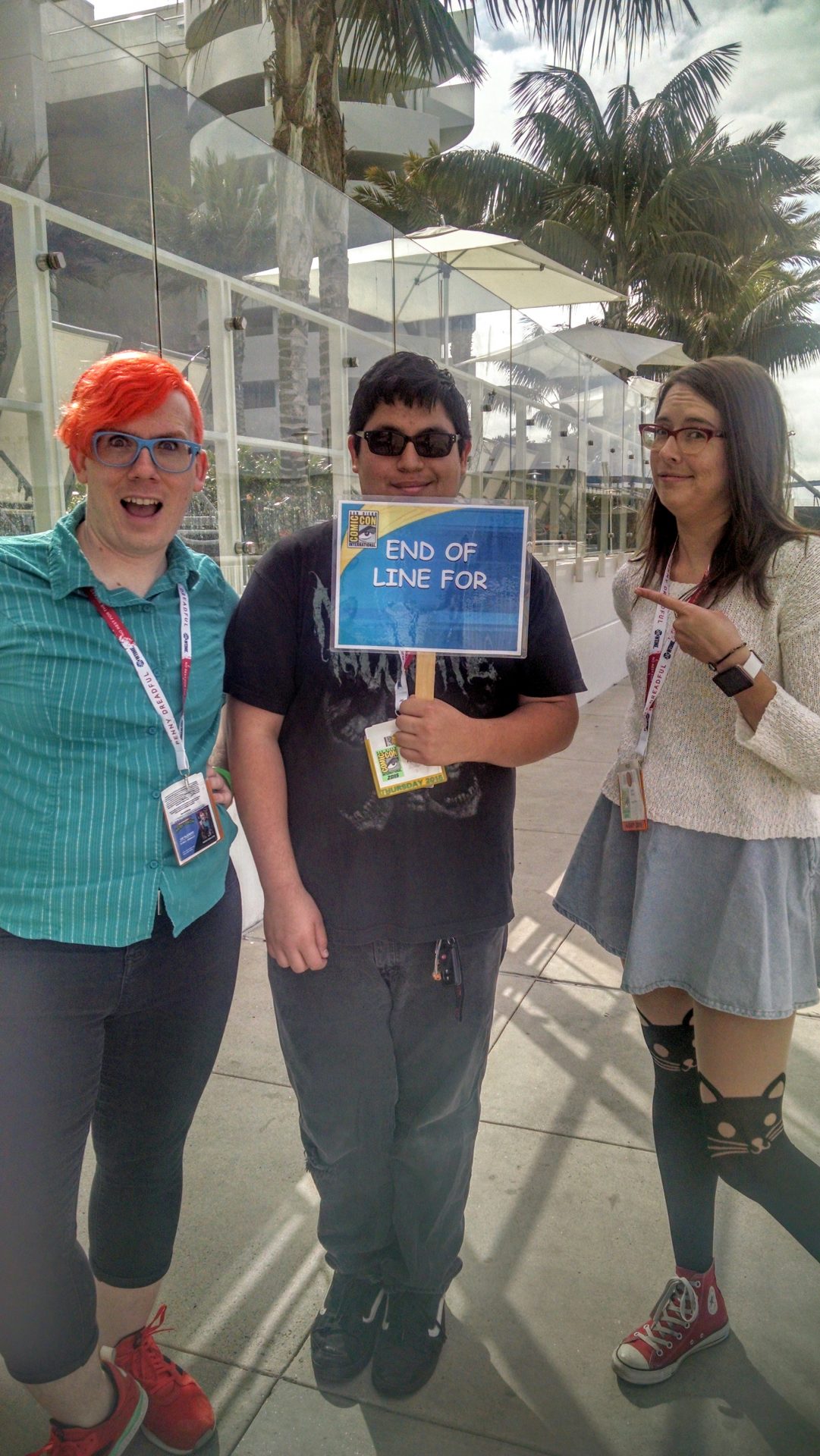 In line for Grant Morrison at SDCC 2015. WE do this for YOU!

This year, we’re particularly excited about a few things we have scheduled. So before the fun begins, we thought we’d let you know what was in store at San Diego Comic Con 2016!

In case you haven’t heard, Starz is slated to release a TV adaptation of Neil Gaiman’s American Gods. This is hands down Jess’ favorite (favourite?) Gaiman title, so a first look at footage from the series is at the top of her list. Expect a report about the panel on Friday!

The Man in the High Castle

If you haven’t seen Amazon’s adaptation of Philip K. Dick’s The Man in the High Castle, we suggest you stop what you’re doing and rectify that immediately. This sci-fi thriller set in world where the Axis powers won WWII, and Nazi Germany and Imperial Japan rule over the United States. We’ve got a seat at the press hour Thursday afternoon, so expect to hear from us about any scoop we can get on season 2.

Last year, Joe Hodgson took Kickstarter by storm by raising over $5.5M to bring back the beloved series Mystery Science Theater 3000. At this year’s SDCC, creator Hodgson and new host Felicia Day will lead a panel discussion around the Kickstarter campaign, as well as share updates on season 11.

Okay, hear us out. Archie comics have been really good lately. The reinvention of Riverdale at the hands of Mark Waid, Chip Zdarsky, Adam Hughes, and head-honcho Roberto Aguirre-Sacasa in the mainstay titles as well as horrifying adult comics like Afterlife with Archie have been amazing. So now there’s a TV series from Aguirre-Sacasa called Riverdale, coming this fall and the first episode is debuting at SDCC. This promises to be more than 90210 or Degrassi –  there’s been hints to Lynchian supernatural goings on underneath the typical high school drama facade.

Cruising in an Ecto-1

Throughout the con, Lyft is putting real Ecto-1s on the street to pick up passengers. Riders just need to select “ghost mode” for a free ride in an actual Ecto-1 stocked with Ecto Cooler and Ghostbusters-themed Twinkies. Rides will almost certainly be scare in

Obviously there’s a lot more action throughout the con, and many happenings we’ll haphazardly stumble into, so be sure to follow @nerdyshow on Twitter as we chronicle our adventures! And if you’ve got something you want us to check out, or a question you want asked at one of the above listed events – give us a shout in the comments below!