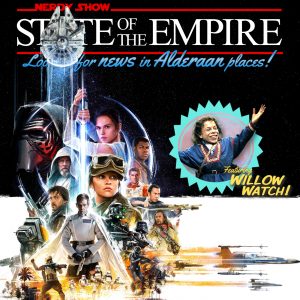 The veil of mystery concealing the first Star Wars spin-off, Rouge One, is finally being lifted, but amidst character reveals, plot details, and other minutia comes extreme scrutiny. The promise of a film that truly puts the “war” in Star Wars is an exciting prospect – one that many now worry could be too good to be true. There’s controversial rumors of executive interference and tonal shifts leading to rewrites and re-shoots. Leave it to your protocol droids at State of the Empire to parse the data and separate the fact from fiction.

In the meantime, there’s much to be excited for as Cap, Doug, and Matt dig into the new characters – including a familiar face from The Clone Wars making his live action debut, the confirmation of a long-standing Rogue One surprise we’ve been touting for months, the latest details on Indiana Jones 5, and much more.

Also – Please consider adding your signature to this petition to remember an uber Star Wars fan, and friend of Nerdy Show, who was a victim of the Pulse massacre by making him the first LGBT Star Wars character. Click here for more info.