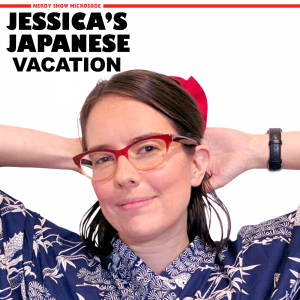 In this episode we’re catching up with Nerdy Show host Jessica who’s returned from a two week adventure in the geek mecca: Japan.

Japan’s got no shortage of intrigue – from mountain temples to sweat-flavored candies – so Cap and boR sat down with Jess to hear all about her fortnight of frolicking in The Land of the Rising Sun. Hear about the rad stuff on display at the Sailor Moon 20th Anniversary Exhibition, power plays by hot spring monkeys, warm pancake beverages, truly foreign takes on sex and gender, a stay in the famed robot hotel, and much more!