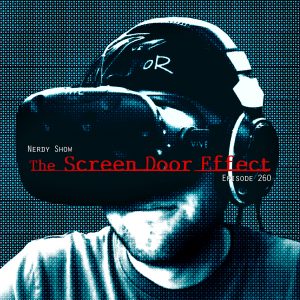 This just in: crushing disappointment. After much VR excitement we’ve finally got our hands on and HTC Vive but all is not well in the virtual world. Turns out it’s not only the Lawnmower Man one must fear, but also the dreaded “screen door effect”. We also discuss the future of Rick and Morty, the surprising fact of the most frequent enemy in first person shooters, and a new face in the presidential race whose background in government-funded time travel makes him an ideal candidate.

Join Cap, boR, Tony, and Doug as we get to the truth about VR’s future, Sasquatch endangerment, discover what Doug’s Miitomo addiction has to do with the Third Reich, and much more.