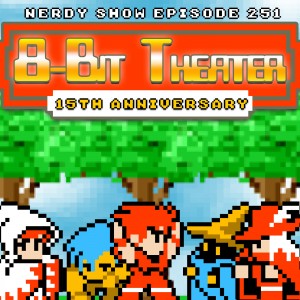 When The Nerdy Show Network’s flagship podcast isn’t unloading on the latest geek news and happenings, we’re diving deep into the super-specific with listener-requested discussions and interviews. This episode happens to be both of those things!

This day marks the 15th anniversary of one of the most influential pieces of Internet literature from the early days of webcomics: 8-Bit Theater. A parody of all things beautiful and horrible about RPGs both on console and tabletop, this series chronicled the adventures of the so-called “Light Warriors” and trolled audiences for nine years with continual anti-climaxes. Not only is it a work of great geeky significance, it’s also one near and dear to Nerdy Show‘s heart as it’s the brainchild of one of our founding hosts: Brian Clevinger.

Join Cap, Trench, Tony, Brandon as they dig up Brian’s sordid, pixelated past. Learn how to quit college in style and stretch a dumb joke out for nearly a decade! Is Fighter a secret genius, or a massive tool? What’s up with Black Mage’s face? These questions might be answered! By listener request we also go deep into narrative RPG design theory and how the old ways of tabletop number crunching should give way to storytelling.

Thanks to Kahalis, Barryeyi, and Joshua Westphal for the topics!