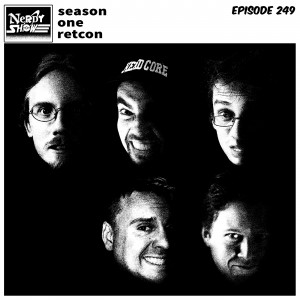 The Nerdy Show Network’s flagship podcast has been going strong for seven years! That’s right, we’ve been nerdcasting since 2009, and by listener-request we’re about to travel back in time to rewrite the past.

Join Nerdy Show‘s original team of hosts: Cap, Hex, and Brian, along with the man who accidentally masterminded the whole enterprise, Aaron, as we travel back to the basement college radio station where it all began. We thought we could leave the past buried, but Nerdy Show fan Twomper has requested that we exhume the corpse of our show’s first “season”. The catch? This is a retcon, baby! We’re rebooting the origin story!

Rate and Review Our Shows on Apple Podcasts