On My Obsession with Hamilton Jess first published this article on her personal blog, but she thought you fine people might enjoy reading about it here, too!

Part of the territory of being a huge nerd means that I never simply “like” things: I’m either completely obsessed or couldn’t be bothered. Lin-Manuel Miranda’s hip-hop musical Hamilton just so happens to fall into the “totally obsessed” category. I listened to literally nothing but the Hamilton Original Cast Recording from October to December. And I’m talking actual literal here – I needed this musical in my earholes so badly that even though it was only released in October, it’s my most-listened-to album of 2015. 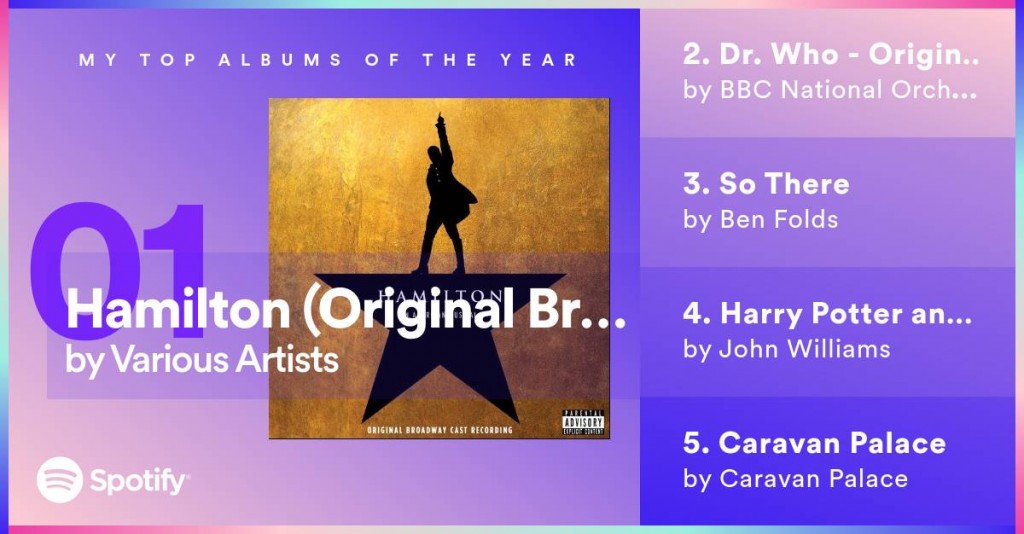 Runners-up give hints to my other obsessions as well.

This Christmas, I received the best present any obsessed fangirl could get: my wonderful parents subsidized the cost of two (sold out) tickets to see this amazing play. I was floored. Stunned. Over-the-moon. In slight shock that the musical that filled in my brain for months was about to be complemented by sights for my eyeballs. I was borderline literal tears of joy.

While at dinner prior to this momentous event, my friend queried, “So why are you so obsessed with Hamilton anyway?”

It was a good question, though I didn’t need to think long. Much like the musical itself, the obsession developed in layers. I had first heard of the musical from a friend at an after-work happy hour. Intrigued, I listened to the soundtrack on the train home… And then again when I got home. The music was just so damn catchy; every song stuck in my head and demanded another listen. Through these subsequent listens, Miranda’s lyrical intricacies drew me deeper into the narrative. The characters deepened and suddenly the faraway, unrelatable events of our country’s formation morphed into a place I felt I belonged in.

Though before I sift through more layers of my obsession, it’ll help to know more about the production itself.

Hamilton is a Broadway musical about our founding father and first Treasury Secretary, Alexander Hamilton. It was written and composed by Lin-Manuel Miranda, who achieved previous Broadway success with his 2008 Tony-winning musical, In the Heights. While on break from that show, Miranda (on a whim) picked up the 800-page biography Alexander Hamilton by Ron Chernow. Inspired, Miranda saw Hamilton’s history as a hip-hop story, that of an immigrant. He drew parallels between Tupac Shakur’s lyrical prowess and tendency to call out other rappers and his own father’s journey to the U.S. from Puerto Rico.

Miranda worked on Hamilton during his off days on In the Heights, debuting the first song at the White House Evening of Poetry, Music, and Spoken Word in 2009. (President Obama would then become so enamored with the idea that he would later see Hamilton…twice.) The show opened Off-Broadway at the Public Theater in February 2015, and quickly moved to the Richard Rodgers Theatre on Broadway on August 6, 2015. How big has this show gotten? It’s currently sold out through the fall of 2016, and national tours to Chicago, LA, and San Francisco are in the planning stages.

So I’m not alone in my obsession. Billboard named the Original Cast Recording the #2 critic’s pick of the year, while Rolling Stone ranked it #8 in their top 50 albums of the year. The album also debuted at #12 on the Billboard 200 chart, later reaching number one in their rap albums chart.

Miranda’s Hamilton is a multi-layered masterpiece. The true beauty of this musical is that it never stales. Each and every listen brings forward the voice of another character, and the voices of the supporting cast are as just as strong as the leading man. This is what lead to my obsession: no matter how many times you listen to the album, a different character speaks to you in a way they’ve never spoken to you before.

At first that character for me was Angelica Schuyler, the strong, smart, witty eldest sibling who (upon my further research) formed strong bonds with many of the founding fathers. She pushed Jefferson to pass legislation to make women equal to men, read voraciously, and was at the heart of many social circles.

Later, I heard more from Washington, the esteemed general who, for all his respect, has trouble rallying others to a common cause. (Fun aside: I once wove, “I am not a maiden in need of defending” into a work conversation.) Since seeing the musical, I now better know the beauty and complexity of Burr’s transformation from cautious bystander to desperate politician attempting to join the ranks of the powerful decision makers. (Leslie Odom Jr., you are a genius.)

And although I don’t feel I can relate much to her, I would be remiss if I didn’t mention the subtle stardom of one Elizabeth Schuyler. Kind, pure, and forgiving, she was constantly competing for her husband’s attention during his life. Seen begging her husband to be included in his story during “That Would Be Enough”, Eliza then becomes the one in charge of his legacy after his death (“Who Lives, Who Dies, Who Tells Your Story”). Honestly, we would probably know nothing of Hamilton were it not for her tireless work in preserving his letters and providing evidence of him penning Washington’s farewell address.

Then there’s the leading man, Hamilton himself. A man obsessed with his legacy, and leaving a lasting impact on the world. It’s a story we all can relate to: who tells our story after we die? What mark are we leaving in this world? These lyrics from “My Shot” constantly echo for me:

I imagine death so much it feels more like a memory.
When’s it gonna get me?
In my sleep? Seven feet ahead of me?
If I see it coming do I run or do I let it be?
Is it like a beat without a melody?

So for as many times as I listened to the OCR, it still could not compare to seeing it brought to life at the Richard Rodgers Theatre. There was a constant flow and rawness to the show, and a realness that can’t simply be captured in the perfection of a studio recording. Every set change, every movement drove the musical to a new, more complex dimension. Each and every person on that stage had a character to play, from the Alexander Hamilton to the humble ensemble member. For the first time I felt like our founding fathers were properly portrayed. Revolution is messy, constantly changing, and in need of impassioned individuals to see it through.

I was reeling from the impact of seeing it for a good 24 hours. 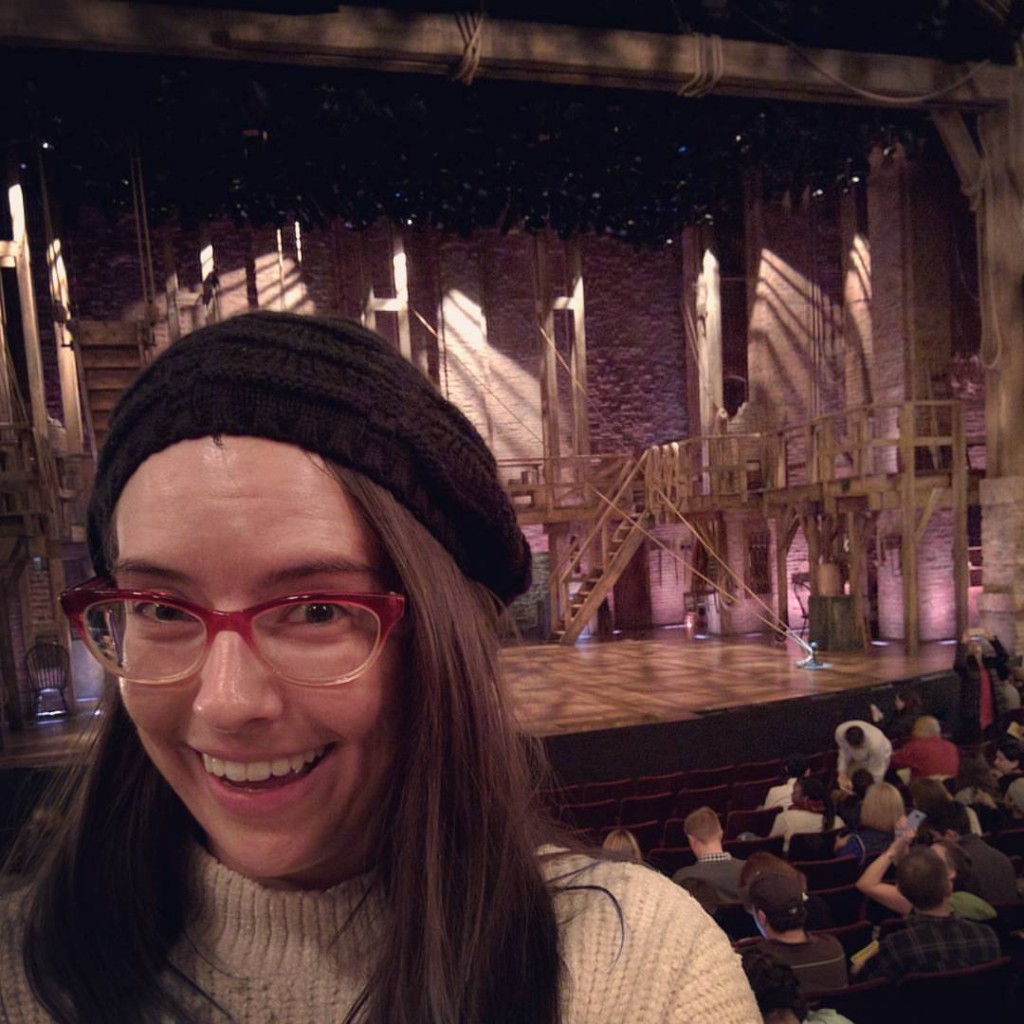 This is what an obsessed crazy person looks like prior to seeing the show of a lifetime.

My Hamilton obsession continues since seeing the show, and I look forward to the lyrics and characters continuing to evolve. The once-silenced voices of Hamilton, Lafayette, Angelica, Eliza, Burr, Laurens, and others grow louder with each listen.

You can listen to the entire original cast recording on Spotify and purchase it on Amazon.

Posted in: Music News and Articles