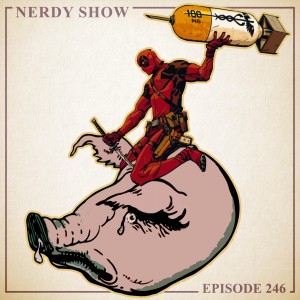 Every other week, The Nerdy Show Network’s flagship podcast unloads on the latest geek news and happenings!

No doubt about it – reality is getting stranger by the day. When scientists are citing sci-fi fears of human-animal hybridization as a danger too real to risk, we’re officially off the deep end. Whether we go the route of Animal Farm, Island of Dr. Moreau, or even an anthropomorphic utopia; Nerdy Show will be there for off-color commentary on this crazy nerd world of ours.

Meanwhile, in other laboratory fiction: our favorite Merc With A Mouth, Deadpool is finally hitting the big screen in a true to form adaptation of his murderous misadventures. Or at least we hope it’s true to form… Join Cap, boR, Jess, and Doug as we take on the fan-requested topic of the upcoming film as well as get you hip to the latest craze: Pocket Mortys! We swap stories of collecting an entourage of young boys and making them battle – similar to, but legally-distinct from Pokémon. That’s far from all – tune in for your weekly dose of comics, video games, sci-tech, and film!

Check Out Our New T-Shirts!