The Call of Cthulhu Mystery Program :: Episode 5 :: The Sordid Shadow Within 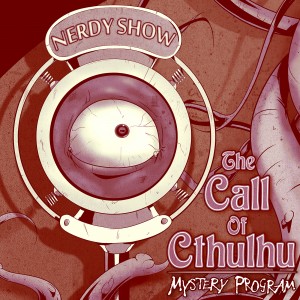 The Call of Cthulhu Mystery Program is live tabletop roleplaying turned into a 1930s radio serial. What dark deeds unfold on the streets of Arkham? And which unwitting souls – innocent or impure – will succumb to the maddening call… OF CTHULHU! This 8-part miniseries, entitled “The Black Birth”, is wrought with unknowable horror and black comedy.

The deceased typist Hannah Pickering is not what she seems! In her housemates’ investigation of the poor girl’s murder, Cyril and Deloras find themselves in the slums where “Hannah” goes by the name Miriam and has a tawdry reputation. They hope to discover more as they venture up to her attic apartment. Meanwhile, after examining the scene of the crime, Ex-Federal agent Spade is convinced the young woman died from a bear attack – even though experienced tracker Hank Jr. can find no proof of animal or man having caused her untimely demise. The two return to the boarding house, ready to make their next move.

Click the links above to download the tracks and support the composers via pay-what-you-want. Tracks in bold are new to this episode..

Posted in: Series 1: The Black Birth The Call of Cthulhu Mystery Program - A Lovecraftian Black Comedy