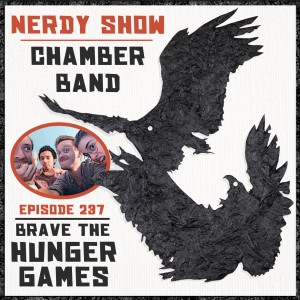 Every other week, The Nerdy Show Network‘s flagship podcast pours over the latest geek news and happenings!

Join us as we hang out with some of the most artful purveyors of Nerd Music on the scene: Chamber Band! You may remember when we spoke to them about their debut record Deities, or perhaps when they made it into the upper echelon of our Top 20 Nerdy Things of 2013. These rockers, who stole our hearts with their emotionally upending songs from the world of Dungeons & Dragons, have returned to conquer a whole new corner of the nerd kingdom: The Hunger Games. But, like their former record, this new album doesn’t require fandom to be a fan – these nerdy nuances highlight bigger themes that anyone can connect with.

Join Cap and Nerdy.FM station manager Lauren Furze (aka TheFifthSister) as they’re joined by Ellen, Chris, A. Sarr, and Sam of Chamber Band for a journey into this new record: Careers. This episode travels through the record with background on each track, songwriting stories, and tales from the road. Cap has zero Hunger Games experience, so Lauren and Chamber Band light the way – sharing how they got into the series, what they connected with, and what made it into the album.