Posted by TheFifthSister on October 4, 2015 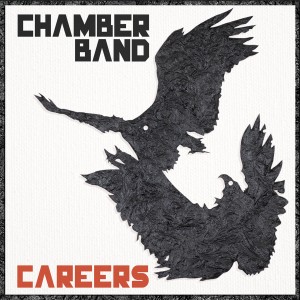 Lauren Furze is co-station manager on our streaming music station, Nerdy.FM. She also reviews the latest records from the multi-faceted Nerd Music genre and publishes her own tunes on her website, TheFifthSister, where this article was first published.

I’m going to state this first and foremost: I think Careers is going to be one of the main contenders for the “best of 2015” title.

Careers is the new album from Chamber Band, and is loosely inspired by the Hunger Games series. Now, that’s not to say you can’t enjoy this album without having read the books or watched the films – because you can. The band have managed to craft an album for everyone to enjoy.

I was completely blown away by this record. Powerful, moving and amazing. The songs are well written, memorable and catchy.

With their 2013 debut, Deities, Chamber Band proved that they know their craft and, for a band with only five members, they know how to make music with the scope of a big band. This is an album that reflects the tensions of the story and world it’s inspired by. There are references layered within every song, but I’m happy to see that Chamber Band haven’t fallen into the trap of just re-telling the story. Instead have found a way to explore the thoughts and emotions going through this universe while making songs that can be relatable for the listener; a very hard feat considering the setting!

I love the pacing of Careers; the moments of quiet, character reflection in slower, more mellow songs such as “Baker’s Boy”, “Love Left”, and “The Nut”. They really suck you into what is going through someone’s head in those moments and make you feel, before the chaos of the games takes over and all hell breaks lose in the faster, upbeat numbers like “Victory Tour” and “Careers”. From start to finish frantic guitars, stirring piano, pounding drums, driving bass and witty, yet insightful lyrics seep love and passion into every second of music produced.

I don’t want to give too much away, because this an album that you have to experience. Take an hour and really immerse yourself in the rhythms and the feelings that the band have expressed. I’m really happy to see an evolution in their sound but also see them sticking to making music that’s accessible for everyone regardless of the world they’re inspired by. With all this and top-notch production and arrangement, it’s easy to say that this is one of the best albums I’ve heard for a long while.

I raise my hand in salute to you, Chamber Band!

Careers releases Tuesday October 6th, but you can hear the whole album Monday night (October 5th) on a Nerdy.FM Listening Party. Join Nerdy Show‘s Cap and myself for a track-by-track interview with the band and the debut of all the songs. It’s happening at 8pm EST and again at 3am EST. Be sure to tune in – it was a complete blast talking to these awesome people and they had some great stories to share!