Posted by NerdyShow on September 7, 2015 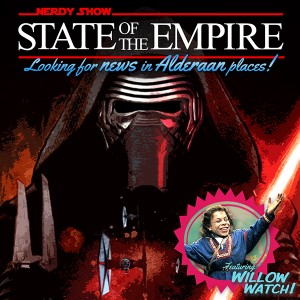 If you’ve been following State of the Empire since our start at the dawn of the Disney era of Star Wars, then you’ve been on “The Journey to The Force Awakens” for quite some time, but for many that journey begins now. September 4th 2015, aka Force Friday, marked the global pistol crack to the transmedia race of marketing and storytelling leading up to the December debut of the new Star Wars. New action figures, books, comics, and games, are bit by bit, piece by piece, unlocking secrets of the world of the new film and building the new history of what came beyond Return of the Jedi.

Your hosts Cap, Doug, Matt, and Rex have made dirty deals with Jawas, hustled hard on the mean streets of Coruscant, and gotten a lot of Bothans killed to bring you the latest outpouring of secrets from the galaxy far, far away. We share Force Friday experiences from midnight releases, pick our favorite new c-list character destined to be a fan-favorite, glean truly shocking secrets from Force Awakens Halloween costumes, and for those of you who dare to go beyond our spoiler-free zone, we reveal the First Order’s sinister plan to bring the galaxy to its knees.

We’ve got all the news, updates, rumors, and wild Star Wars speculation you can handle. Heck, that’s not even all! Join us for impromptu fanfiction, new findings in our search for a Willow sequel, and… do you remember where you were when you first learned Qui-Gon was meeting his “noble end”? All this and more in this episode of State of the Empire, now brought to you in part by Consequence of Sound.