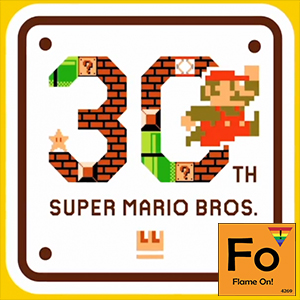 Flame ON! is the all-gay, all-geek podcast. Tune in for dishing on the latest in pop and queer culture!

The boys of Flame ON! are back for an all new cast recording! While Bryan is away on assignment, Pat, The Talking Bear Skin Rug, assembles this month’s round table, which includes Jeff, Jarrod and B.J., to discuss the pop culture topics that are tickling their fancy! Listen in for their take on the Kim Davis controversy including the “Still Does His/Her Job” meme and the incredibly hysterical Next To Kim Davis Twitter account! The also talk TV’s Summer season ending and what they’re looking forward to in the upcoming Fall season! After that it’s video games and celebrating the 30th anniversary of Super Mario! They close it out with a little discussion about comics and a listener question! Sit back and enjoy this episode of Flame ON!