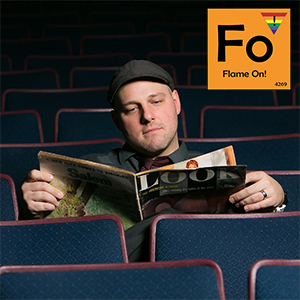 Flame ON! is the all-gay, all-geek podcast. Tune in for dishing on the latest in pop and queer culture!

This Flame ON! Friday, Bryan sits down with Dave Ebersole, the writer of the noir comic Dash for Northwest Press. Bryan talks to Dave about his work as a playwright, his formidable years at a religious school, and how those experiences have shaped his artistic work. They also get into their respective views on Christianity, how much their parochial schooling affected their current lives, and how frustrating it can be as gay Christians to deal with other parts of the Christian community. Oh, and there’s lots of talk about comics, what Dave would love to write for the major publishers, and the future of the Dash series.