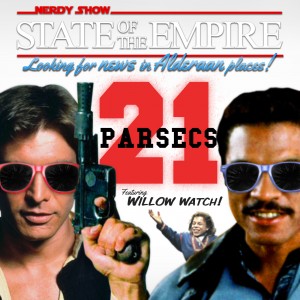 Since Star Wars Celebration there’s been a whirlwind of news from the galaxy far, far away. New films announced, new games announced, new comics announced, new secrets from The Force Awakens, and rumors galore! We stand now on the precipice of a transmedia blitz that could surpass even the mayhem of The Phantom Menace… and that’s just the beginning.

We’re also reeling over the announcement that the young Han Solo film is a real thing that’s happening. With the directors of 21 Jump Street at the helm, we can only hope that “21 Parsecs” is as cool as we’re imagining and that young Lando is along for the ride. The speculation doesn’t end there – we’ve got new insights into all the currently announced Star Wars films, and even some that haven’t been announced, as well as discussions on the glory of Micro Machines, the surprising significance of Sullust, our theories surrounding the unexpected return of Wicket, an inexplicable TaleSpin conversation, and much, much more.

So grab some Butterfinger BB8s and your Takodana Taco Bell Meal with Kylo Wren drink topper, and chew over the latest Star Wars news.