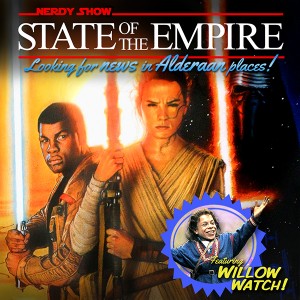 Just when you were almost back to sleep… there has been an awakening! It’s only been two weeks since our last report and there’s already an entire episode’s worth of new Star Wars announcements to cover. The dam has officially burst, the journey to The Force Awakens has truly begun, and the world is on the precipice of descending into Star Wars mania.

The epicenter of this latest spike in activity is D23, Disney’s expo celebrating all their various properties and projects. Our very own Matt Spill was on-site to bear witness to the reveal of the cast of Rogue One, new insights from Episode VII, and the announcement that not only is a Star Wars land coming to Disney Parks, but that it’s their biggest, boldest project to date.

Join Cap, Doug and Matt as we discuss the possibilities this immersive Star Wars theme park represents, peruse the catalog of forthcoming action figures for hints at Force Awakening secrets, and even glean a dark prophecy from a spiral-bound notebook at Wal-Mart.

We’ll see you again in another two weeks for Force Friday!