The Martian Hype Continues at SDCC 2015

Imagine this: an excited, scientifically-minded individual sees a panel at San Diego Comic Con titled, Journey to Mars. The description boasts a panel of NASA scientists and a special mystery guest to talk about how we’ll get to the red planet.

This individual then assumes that given the fact that Neil deGrasse Tyson was giving a Cosmos talk at the con, he HAD to be the secret guest, right?

This secret guest was, in fact, none other than Andy Weir, author of The Martian. Because, you know, there’s that movie coming out and he knows stuff about going to Mars.

While I still don’t understand the general public’s affinity for the book, I do admit that the trailer doesn’t look that bad. And realistically, the fact that it’s written by Drew Goddard (Cabin in the Woods, Daredevil) is incredibly promising.

Perhaps this will be the first time the movie is better than the book!

Though before we fall down the rabbit-hole of my unpopular opinions regarding Andy Weir’s The Martian, let’s get back to the panel. Because, despite the movie promotion, the presentation was incredibly informative in revealing NASA’s plan to get a manned mission to Mars. It turns out they’re not that far off. Testing has already begun for some aspects of the Space Launch System (the vehicle that will launch the Orion spacecraft out of low-earth orbit). It’s currently entering the design certification stage – basically the final stage before construction begins.

Also on the panel was Victor Glover, a recent graduate from astronaut training, who is an extremely probable candidate for our first manned mission to Mars. So we have the SLS almost ready to start construction, and have begun naming possible candidates for a mission. Provided NASA’s funding doesn’t get cut, this seems we could really have a Mars mission in the next ten years!

Before sending a manned mission, NASA plans to launch two more rovers: Insight and Mars 2020. Insight is particularly interesting in that it will be equipped to measure seismic activity on the planet’s surface. While NASA has observed avalanches and similar phenomenon on the red planet, it’s unclear whether or not the surface of Mars is still active, or if these events are caused by other forces. The answer to that question plays a large factor in the design of habitation units on the surface of the planet. 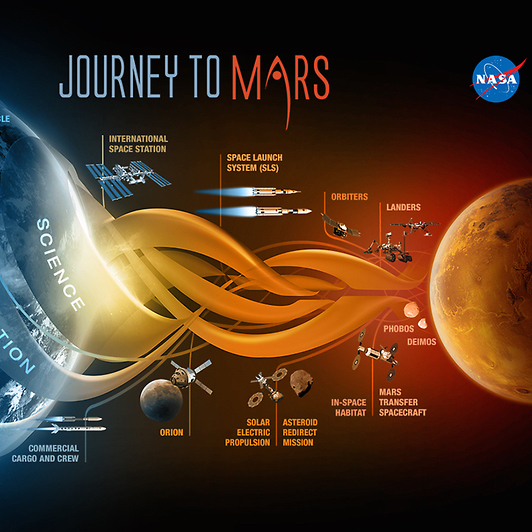 Mars 2020, on the other hand, will be on the hunt for water. Back in the day (3.5 billion years ago), Mars was much more Earth-like. Water abounded on the surface of the planet, only to eventually evaporate and be pushed underground. NASA theorizes that there are plenty of hidden aquifers on the Mars, and it will be Mars 2020’s mission to locate them. The locations of these aquifers will then be used to plan landing sites for future missions as sources for astronauts to obtain water.

So here’s my takeaway from the panel: we’re going to Mars, and we’re going to Mars relatively soon. We’re designing and building the vehicles to get there, and sending rovers out to scout habitable locations and conditions. How frakkin’ exciting is that?! Now we just need the government to stop cutting funds to NASA. Or perhaps profits from book and movie ticket sales of The Martian can help subsidize this effort. If Weir is going to proliferate flat-charactered science adventure novels, he might as well make himself useful.