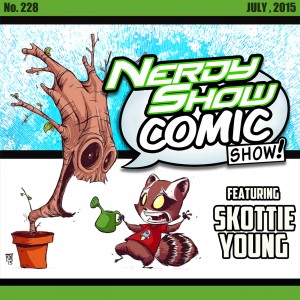 While Nerdy Show hosts Cap and Jessica do recount some of their adventures during the biggest week in pop culture, the main event comes from last month’s iteration of the best convention exclusively for comic books: HeroesCon. Cap sat down with artist/writer Skottie Young – the brains behind the Lil’ Marvel Universe and all those totally adorable baby portraits of your favorite characters. But he ain’t all cutesy, Young also brings the pain in the Rocket Raccoon solo book and in the forthcoming I Hate Fairyland. Hear the strange tale of how he made a career of cutsifying characters, what’s to hate about Fairyland, how an artist makes a transition to writer, and even some tales of alternate reality Thundercats reboots that almost happened!