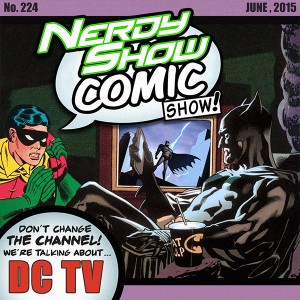 We’re not timid to admit we have a love/hate relationship with DC Comics. From the spotty comics quality after the company-wide reset of continuity, to the post-Nolan films, it’s fuel to send a fan fuming over mistreated characters and missed opportunities. But on TV… on TV DC reigns supreme.

Beginning with Arrow and spinning out to the upcoming Legends of Tomorrow and Supergirl, the modern era of live action DC shows bring superheroics to the small screen like no other (at least most of the time). In fact, there’s nothing new here – DC has ruled TV since the 1950s. In this episode, we salute the modern era of DC TV, beginning with a listener-requested discussion on Bruce Timm and Paul Dini’s animated universe; from Batman: The Animated Series to Justice League Unlimited. Next we move on to the current live action universe, and finally explore the comics publisher’s new initiative which might finally free the characters and creators we love from mediocrity.

Join Nerdy Show hosts Cap, Tony, Aaron, Matt, and La Valle, along with Flame On!‘s Bryan and Derpy Show‘s boR for passionate discussions on the highs and lows of DC’s television adventures. Listen to the full episode below or join us in the studio and watch our live action DC TV discussion here.

Thanks to Caitlin and Ethan Krueger for the Microsode topic.