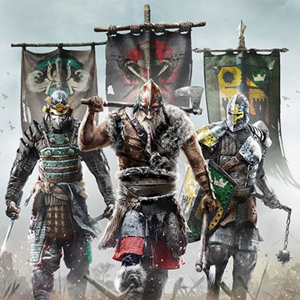 The gladiatorial medieval combat game For Honor left quite an impression on me after the Ubisoft conference. So much so that on the last day of E3 I sacrificed two hours in line just to get into the walled-off For Honor theater on the show floor. I’m really glad I stuck it out.

What I assumed was going to be an in-depth video was actually a hands-on demo! We were given 8 minutes of training and then dove into a 4 vs. 4 game. Initially I thought the combat looked simple, but it’s way more interactive than I could have imagined. You can block three different directions when in combat with another player. Depending on what direction they’re attacking, you can attempt to match their blows with your own defense or attack. It’s very fluid and easily accomplished with a flick of the right thumb stick. Conversely, when you’re on the offensive, you can use light or strong attacks in three different directions and try to hit where the enemy isn’t defending. It’s a simple and effective way to have a 1-on-1 dual.

There are other moves as well; such as guard breaks and lunges. I adapted swiftly to the controls… and then it was time for the real match. We played a match of Dominion: a large area with 3 zones (A, B, C) need to be captured. Both sides played as knights. We charged forth as a group towards B in the center. When there, we met with a large force of A.I. bots and two players in a clash that seemed straight out of any cinematic medieval battle scene. My team struggled against the opposition, but finally took down two of their players and proceeded to slaughter the remaining soldiers. The zone was ours, so we split up and headed towards the two remaining zones simultaneously.

Getting to zone C, I met up with a single enemy knight. We drew swords in a corridor and he quickly took half my health as I tried to parry and block. We fought to a tall ledge. Uncomfortably close to death, I rammed through his defenses with my sword and kicked him into the abyss. I won the battle and captured the zone. Seeing how badly I was wounded, the demo presenter informed me I would heal if I stayed in the zone that our side now controlled. After fully healing, my other teammates conquered the final zone. Alas but the center zone was taken back. I unlocked the Catapult ability and launched a volley directly in the center of the map. The enemy forces were slain and my other knights quickly took back B. When my team hit 1,000 points a new feature made itself known. The enemy would no longer be able to respawn upon dying. If they knocked our points back down again by capturing zones they could spawn once more, but we wouldn’t let them. We quickly hunted them until there was just one left. All four of us surrounded him and he activated an ability which caused his sword to glow. I have no idea what he did, but he quickly took out two of us. My remaining teammate and I gave it our all and attacked from both sides simultaneously. I used the execute button and took his head clean off. We had won, and I made first place.

No exaggeration: this game is the most fun I’ve had at E3. With no release date yet, For Honoris truly a title I cannot wait for. Someday I’ll see you on the battlefield of honor. I will not show mercy.

Check out all our E3 coverage and join the discussion on the Nerdy Show Forums.