Episode 227 :: The Great Doctor Who Debate 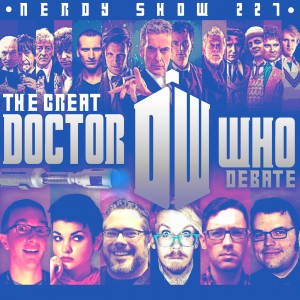 There’s no denying that Doctor Who has completely regenerated itself. What was once a quirky, low budget British sci-fi has become a big budget global phenomena. 50 years after its humble beginnings, the time traveling Doctor and his cadre of companions have captured the hearts of nerd and mainstream audiences alike. But it’s not all love for the gallant Gallifreyan; The Doctor’s got his share of detractors – some of them in Nerdy Show!

In this listener-requested episode, resident Nerdy Show Whovians Nina, Tony, and Flame On!‘s Bryan go head-to-head with Cap, Doug, and Briggs who’ve got beef with the beloved show. Whether you’re a longtime fan or have kept a safe distance – this episode should get you riled up. This Doctor Who debate gives you a ringside seat for fight that pulls no punches, and even hosts on the same side aren’t safe from each other. We not only deconstruct Who, but fandom at large: When does it go too far? What makes fans come back for more?

Never before has Nerdy Show had an episode like this, so power up your sonic screwdrivers or get ready to push up your glasses – this is a nerd debate for the ages.

Thanks to Korrik for the episode topic! Join in on the discussion here or WATCH the debate in glorious video!