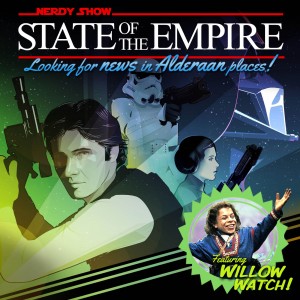 …Though for once we’re looking in the right place – We’re on site at Star Wars Celebration Anaheim! Thanks to the support of Consequence of Sound our coverage is fully operational and straight from the source.

The Star Wars universe is poised to erupt in a fervor not seen since the series’ debut. This weekend alone we’ve seen Han and Chewie return to the screen, Rebels season 2 bridge the gap between the Clone Wars and the Rebellion, Star Wars Battlefront return gamers to the frontlines, and Rogue One promise to show us a side of Star Wars we’ve never seen on the screen.

Join Cap, Doug, Matt, and special guest host Matthew Rex as we recount our adventures in perilous lines and in-depth panels. We scavenge for secret truths and read between the lines to give you the most in depth and hypothetically accurate dish on Star Wars news in the galaxy.

Download from the player above :: Discuss this episode on the Nerdy Show Forums