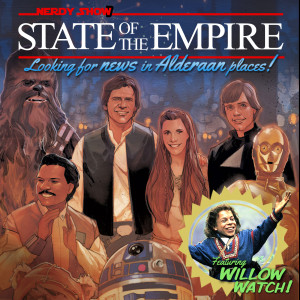 We’re only 9 months away from the release of Star Wars Episode VII: The Force Awakens and, like a great engine of war, the rumor mill is churning!  The printing presses are churning too – because we’re witnessing the first signs of a transmedia blitz that’s ushering in the new age of Star Wars; comics, novels, and more branded as “The Journey to Star Wars: The Force Awakens”.

Join Cap, Doug, Matt, and Tony as we embark on this “Journey” with a rough outline of what’s to come and what we see on the horizon. We review the first wave of Marvel Star Wars comics, speculate on the recently-announced first Star Wars spin-off, Rogue One, and the mysterious spin-off to follow. But that’s not all – our Bothan spies have been hard at work! WE OUTLINE THE ENTIRETY OF EPISODE VII. That’s right, safely contained in a spoiler-proof carbonite segment at the end of the episode we merge rumors into a complete map of things to come. We know a great many “whats” and “hows” but it’s up to us to fill in the outline with the all-important “whys”. We also speculate on how Star Wars Rebels‘ new revelations connect the show with A New Hope.

Tune in for the overview of the latest in Star Wars news, or boldly stick around as we look beneath the mask of the forthcoming Star Wars timeline.

Discuss this episode on the Nerdy Show Forums