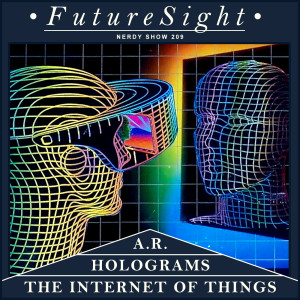 We’ve been saying it for years, but now it’s truer than ever: Augmented Reality is coming.  Not much longer now and the synthesis between the digital and virtual world will be complete.

Microsoft recently unveiled the HoloLens, a headset device that boast every AR fantasy and promises to revolutionize heads-up interfaces. We’re calling it: this is the sign. Google Glass was but a prelude – the war to put things on, over, and in our faces is on. The new smartphone lives on your face.

Join Cap, Jon, Jess, and Luke as we look to the near future and the ways augmented reality and even virtual reality will change our lives sooner than you’d think. And we’re not just talking fixing pipes with virtual plumbers – you’ll be laying them too. It’s like the Net Nanny warned: cyber sex is real and coming to a headset near you. But it’s not just our faces and love life that are getting a makeover, it’s the entire first world living arrangement. We’re talking smart homes and how the “Internet of Things” is making the purported “home of the future” a thing of the past one wacky appliance at a time. Sassy robot maids are only a dream away; and you never know, they might be full service.

Products For The Future Now: