Hopefully you know Fangamer. They’re one of the most inspired designers of game-themed merch and apparel in the nerd world. Fangamer formed from Starmen.net the fan community behind Nintendo’s 1995 cult hit EarthBound and their well-documented fan campaigns to liberate the series from obscurity and translate the series’ last installment, Mother 3. Now, Fangamer is returning to their roots with the ultimate love letter to the game that brought them together.

You Are Now EarthBound is Fangamer’s advantageous Kickstarter project – launched today. Not only is their Kickstarter video one of the most clever funding videos I’ve seen, but this ambitious project pulls together an unprecedented collection of fan love for one of the most dedicated fan bases in gaming history.

Should their $100,000 goal be reached, Fangamer will produce:

There is also an 8GB Nessbot USB drive and a yellow-ish backpack full of mysterious goodies available at specific backer tiers (which, of course, are in increments of 2n+1). 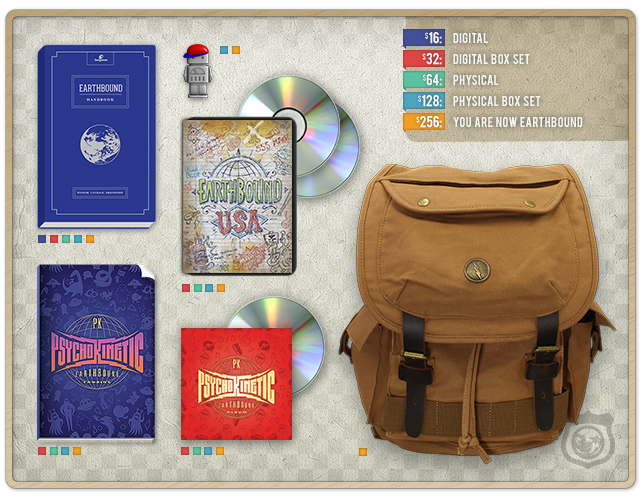 For my part? I finally started playing EarthBound this morning on my WiiU. I know, I know, I’m a terrible person. But here’s the rub, reading through this Kickstarter campaign finally gave me the kick in the ass I needed to play the game. That’s what I think makes this campaign so authentic and special: with all of our advances in modern gaming, one group can create such a spectacular homage to a 20-year-old game that it still inspires people to pick up a controller.

Watch the trailer for EarthBound USA below, and head over to Kickstarter to support this amazing project!