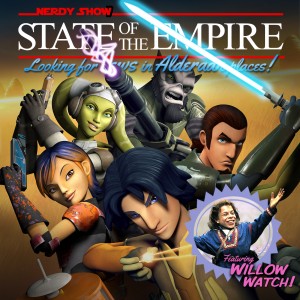 The big news this month is Star Wars Rebels has premiered – launching the new official cannon of Star Wars! As of this recording we’ve seen the hour-long debut, “Spark of Rebellion” as well as the first regular episode “Droids in Distress”. As faithful followers of the show know, even with the talented Greg Weisman on board, we weren’t getting our hopes up. We’ve been burnt too many times before… and had our limbs cut off, and kicked into lava… Join Cap, Doug, and Matt for a look at the first two episodes of Rebels and learn how this show as surprised us. There’s cameos, Easter eggs, compelling characters, and a body count to boot!

Discuss this episode on the forums!

Posted in: Nerdy Show 2014 State of the Empire

Tagged: State of the Empire