When I first fell in love with Sailor Moon, it was with the original dub by DiC. However, as I got older I learned of the horror that was the DiC dub…deleted episodes and scenes, made Haruka & Michiru cousins, and terribly translated attacks, like the SuperS: “Super Moon Target!” (Where’s the verb, DiC?) As a fan, I felt so betrayed by these changes that I became suspicious of all anime dubs. And to this day, I vastly prefer subs when watching anime.

But of course I wasn’t going to not watch the new Sailor Moon dub when it aired on Hulu. 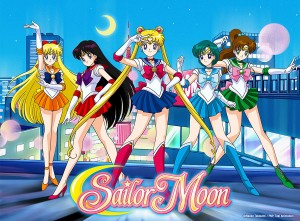 For those unaware, Viz Media is releasing remastered, uncut dubs for all 200 episodes of the original Sailor Moon anime. And yes, that includes the previously undubbed Sailor Stars season. As of the time of this writing, the first 23 episodes are available to stream, with more following every week. PLUS the blu-ray of the first 23 episodes (“Season 1 -Part 1”) comes out in early November with an 88 page art book! I got the chance to watch a bit of the new Sailor Moon dub this weekend, and I have to say that I was pleasantly surprised by the presentation. The translation kept the Scout’s original English names, as well as maintained the same classic phrasing for transformations and attacks.

On the voice acting side, I’m underwhelmed. Stephanie Sheh plays an incredibly annoying Usagi. While in line with Usagi’s character, her voice does have a tendency to wear on you after awhile. Additionally, when Sheh speaks in a non-annoying tone she sounds incredibly similar to Kate Higgins, who voices Ami/Sailor Mercury. After getting through a sampling of episodes, I was surprised that I missed aspects of the original dub. I miss Luna’s British accent, and the way that each scout had a distinctive voice. And why the heck does Shingo sound like he’s hit puberty already? He’s supposed to be in elementary school!

While the new dub is a vast improvement in regard to content and translation quality, it falls short in the the voice department. Nothing about the dub makes me want to keep watching, and I’ll plan to continue watching subs as they’re re-released. The good news is that the blu-ray release, of course, contains both the original language track as well as the new dubs. So if you’re looking for a premium experience for you classic Sailor Moon watching – you know what to do! Are you following Nerdy Show on Twitter, Facebook, Tumblr, & Google +?