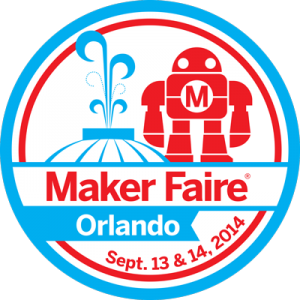 Hackers, makers, inventors, artists, actual rocket scientists, and children of all ages came in droves to the Orlando Science Center this past weekend to get hands on and maybe learn a thing or two at Central Florida’s first full-fledged Maker Faire. After two years as a “mini” Maker Faire, Maker Faire Orlando has graduated to the big leagues and the town’s ever-growing reputation as a nerd-mecca, is now further cemented – our dominion ever-growing. For the uninitiated, Maker Faires are events (sponsored by Make Magazine) that “celebrate arts, crafts, engineering, science projects and the D.I.Y. mindset” – that means a veritable playground of projects from modded Power Wheel derbies to dynamic, government-ready green energy solutions. Or… at least that’s this year’s Maker Faire Orlando . These events happen all over the world, the biggest being Make‘s home turf of San Francisco. O-Town’s show is certainly burgeoning, but with over 200 exhibits it offered a solid and varied showing.

Nerdy Show‘s Cap and Germaine were on-site at the event. Here’s what they saw! 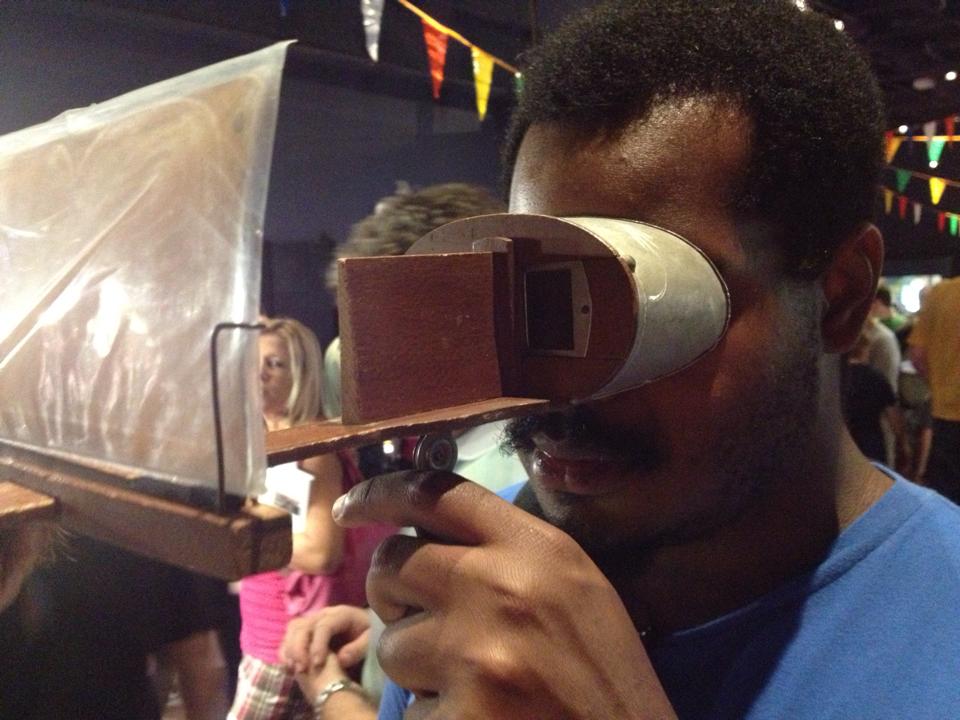 Germaine: This one was MUCH bigger than last year. In addition to expanding in size this year, it also became a two day event. Back when it was a Mini Maker Faire, they had gotten feedback from guests who felt there was not enough time in one day to look around, and I agree with them. There was some carry over to this year such as the return of Justin Petersen (creator of the comic Very Near Mint, and artist behind some of Tijuana Flats’ best in-store murals), and many, many 3D printing booths. Last year’s event was the first time I’d ever seen one in person and was interested in learning more about them. Going this year was such an amazing experience, I wanted to learn more about Orlando’s maker scene, so I attended both days.

Cap: This year being my first, I can’t appreciate the change in scope, but I can appreciate the scope overall. The Orlando Science Center is a decent size and every floor, every classroom – every conceivable interior space was inhabited. With that scope they were then able to break down their exhibitors into intuitive zones. Want to see showcases from every maker/hackerspace in the state? Want to peruse strange D.I.Y. inventions? Want to scope out some indie gaming, watch robots battle, play with Legos, or maybe hang with NASA reps? It makes sense they upgraded to two days. The only under-utilized part was outside. Our Maker Faire can’t boast elaborate Rube-Goldberg machines or fire-belching sculptures… yet. This year looked like a resounding success, so my fingers are crossed for it only getting bigger and wilder.

What’s some of your favorite stuff from this year, Germaine? 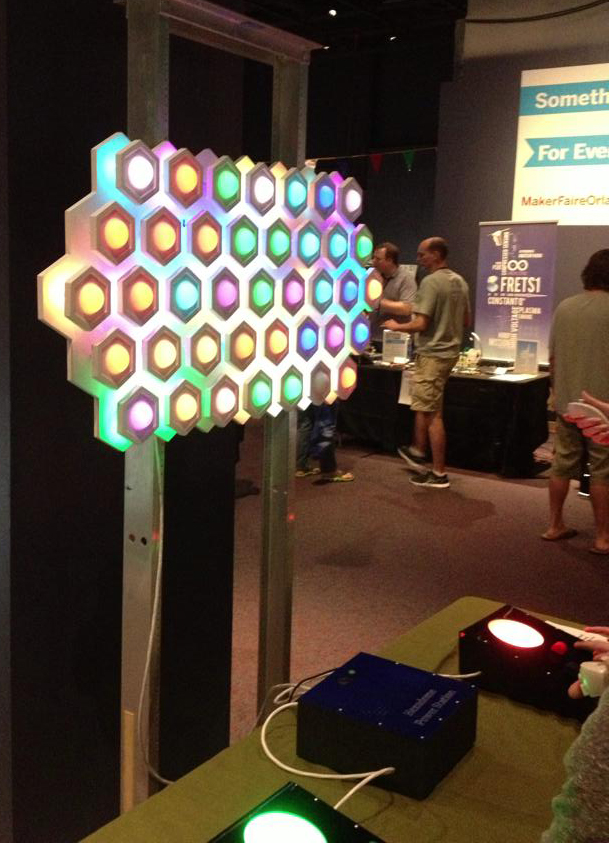 G: For starters, The Hexadome Paintball Lightwall (see image to the right). It was described as a “spin on the classic duck shoot game from the carnival”. I wish I had been able to find the maker responsible to find out if they based it on the interior of the 4th Doctor’s TARDIS from classic Doctor Who.

Next up was Take It Apart. The Maker Faire Orlando organizers met them at the San Francisco Faire and they were so impressed that they offered to bring them and their booth to our coast. Their function is taking apart old machines (e-waste) in order to teach others how it all works and what’s inside the objects we take for granted. It’s a huge draw for kids. Normally children would not be allowed to touch certain items at booths, but at Take It Apart, it is a Free For All.

Last but not least, was Virtual Foot Flyer. It’s a paragliding simulator that uses Oculus VR. I’ve never paraglided for real, but I will admit, it almost felt real! I was pretty nervous gliding over fake mountains. The motion controls were spot on and having the wind in my face helped too. I hope this takes off with a whole collection of new experiences fly. Also, having had a taste, I wouldn’t mind going paragliding for real.

C: Perhaps the most fun I had at any booth, was Cybernath Labs and their Cooperative Relativity Unit (CRU). Imagine two industrial control panels with all the switches, dials, keys, and buttons you’d expect. The two panels can’t see one another, and both have differently labeled switches. The goal is to avert catastrophe, but ever command the computer gives you is for the other player’s console – so you have to shout commands to them, while listening to their commands. To make matters worse, the computer will occasionally ask for unlabeled commands, and glitch out to make figuring out what it’s asking even harder. It’s like if Paranoia XP was based around working in a nuclear reactor – cryptic goals, flashing lights, fires (on screen), and even panels that burst out if you’re doing really bad. I loved it! Would’ve played it all day. 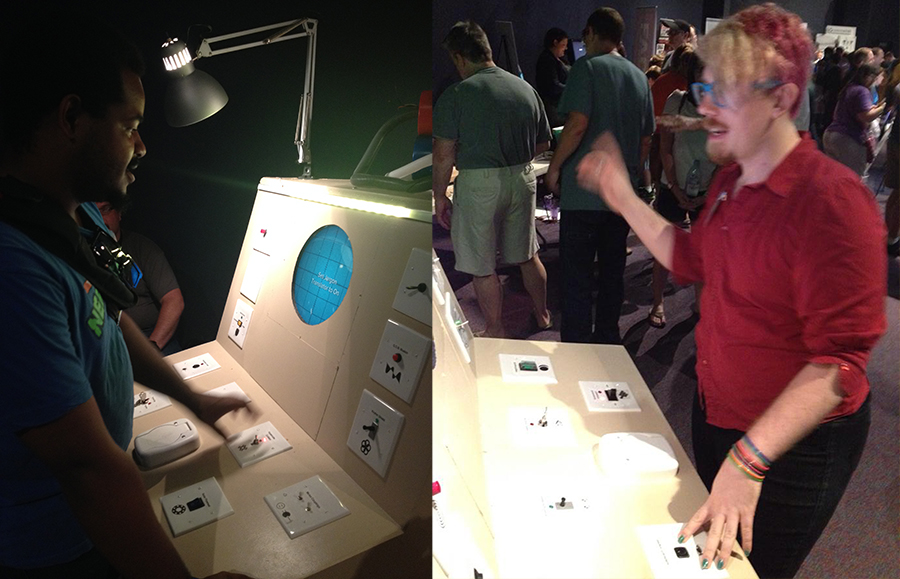 Another lasting experience from the weekend was seeing the green energy concepts of WindAge. They’re working to implement a wind power system on Florida’s highways using horizontal turbines that would be suspended over traffic. This is particularly brilliant because it’s guaranteed power – the Department of Transportation already knows the speed and traffic patterns, so there would be a consistent yield. He’s working with the DoT and has already hung a test model over a highway. Hopefully it will come to fruition, because the project seems like a must for every highway system the world over. He also was showing some concepts for what he calls a DC (direct current) Village: urban and roadside exercise stations that pay people for using them. It’s an intriguing concept with a lot of potential social ramifications: office workers paying for their lunch with exercise breaks? Homeless having steady income and getting jacked? The park concepts feature seated pedal exercisers and laughable, but probably fun, features like a hamster-style treadmill and this thing from Conan the Barbarian. Would it work? I can’t rightly say – but I’d certainly like to find out. 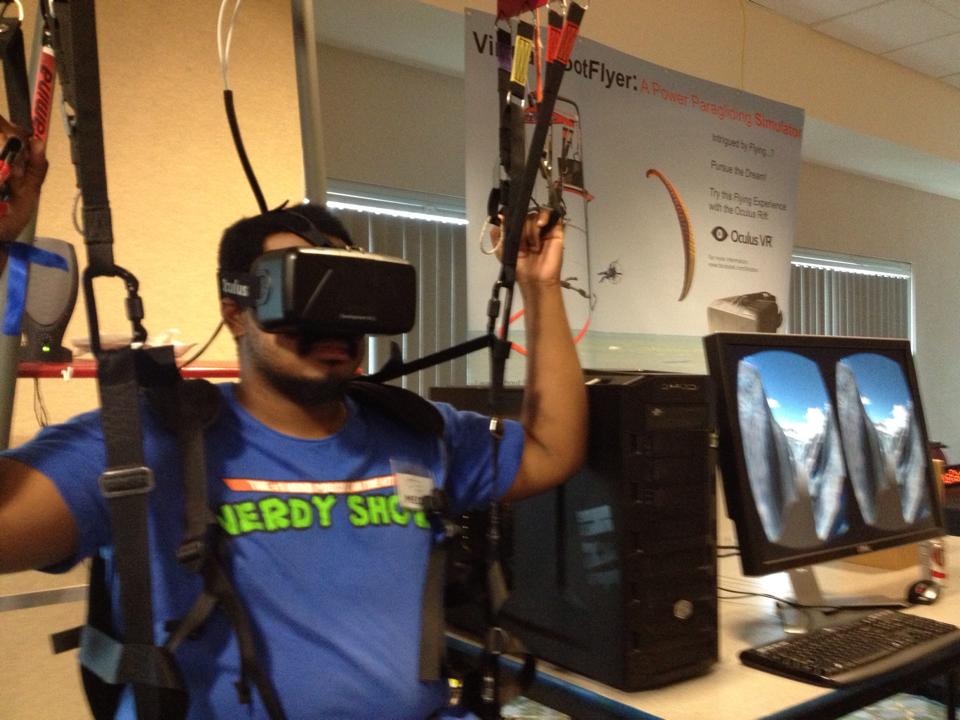 It seems logical that Maker Fair Orlando will only grow from here. While it still has the home-spun feel of a Mini Maker Fair in a lot of ways, the presence of this year alone is a good argument for it becoming an even larger event. The Orlando Science Center served as a good venue, and certainly very centralized. It feels like it’s very much the right venue for the event at this stage of its growth – crowding booths into already filled exhibit halls and weekend crowds of manic kids is a quirky and sensible backdrop that certainly emphasizes the educational angle of Maker Faire. Hopefully the OSC facilities and the surrounding grounds will allow Maker Faire Orlando the space and resources they need to grow. This year, though it was crowded, the only event I saw that took a hit was the annual Power Racing competition (a go-kart-style derby of custom modded Power Wheels). I’d always wanted to see it in person, but the sliver of track they were given didn’t accommodate the Mario Kart-style mayhem of old that I’d heard so much about.

On the whole, I enjoyed connecting with the people behind all of Florida’s hackerspaces and seeing and hearing about all their projects. The growth of this Maker Faire is a credit to those folks and their hard work making Florida a better place for D.I.Y. creatives to thrive. See below for a gallery of more photos from the event and see YOU at next year’s Maker Faire Orlando! 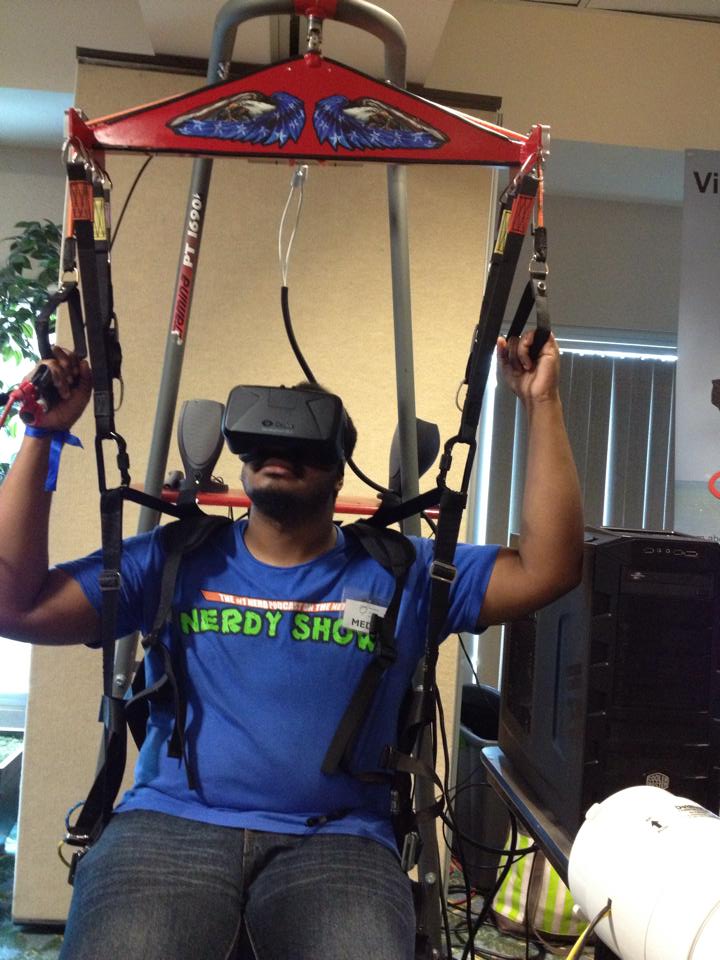 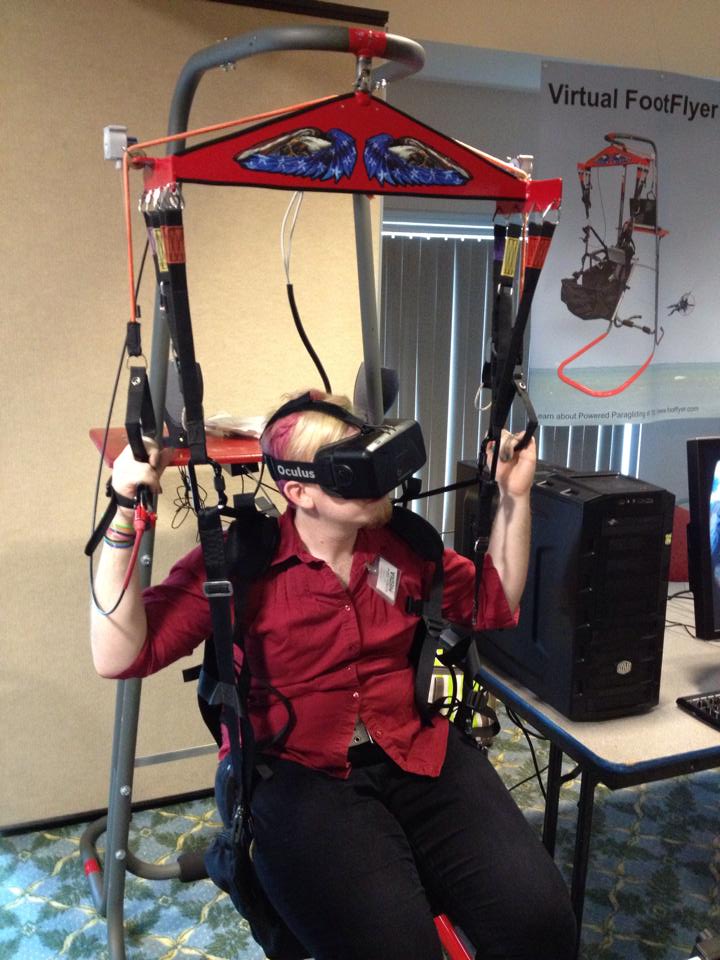 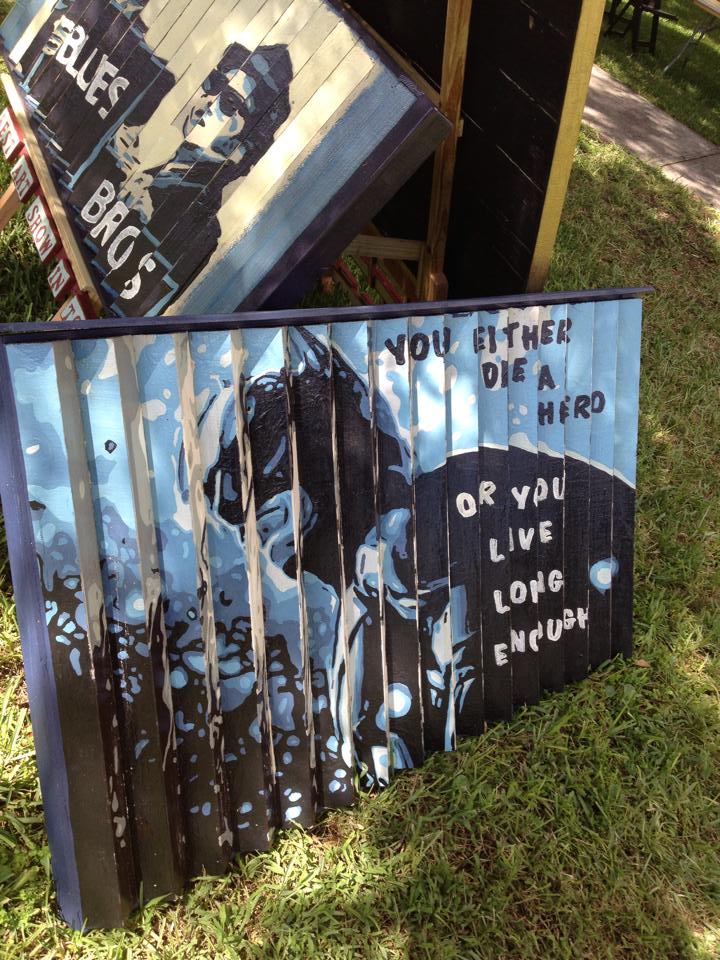 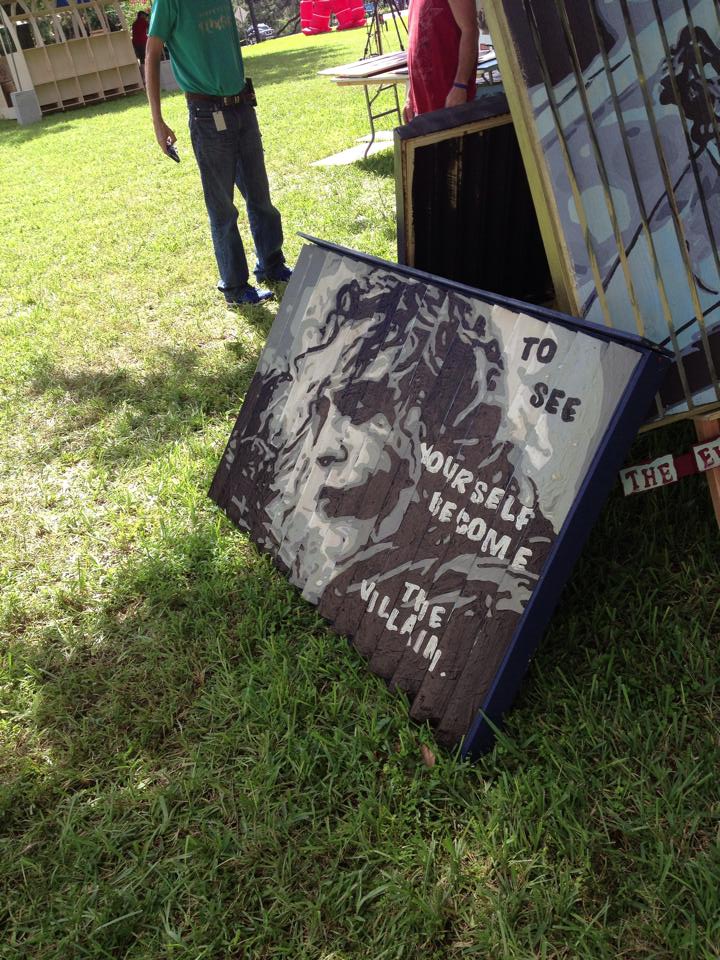 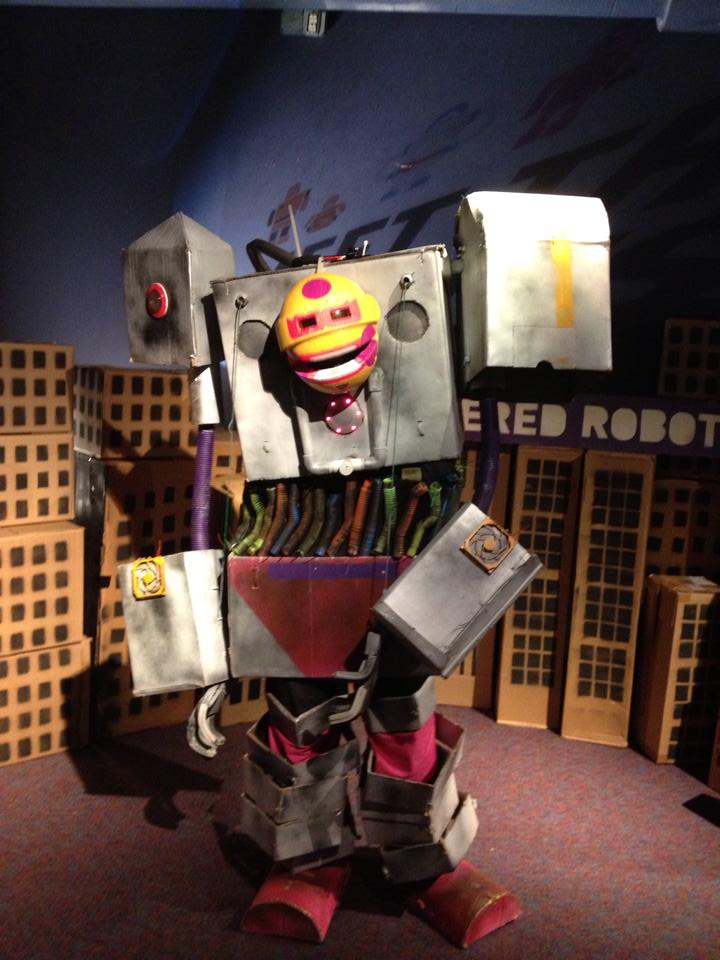 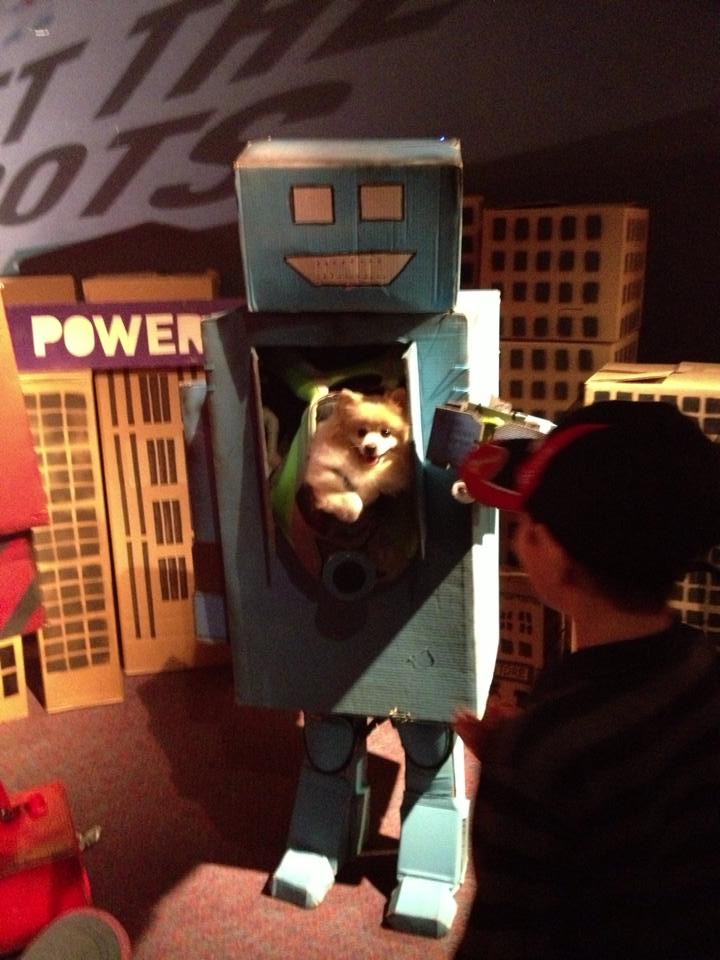 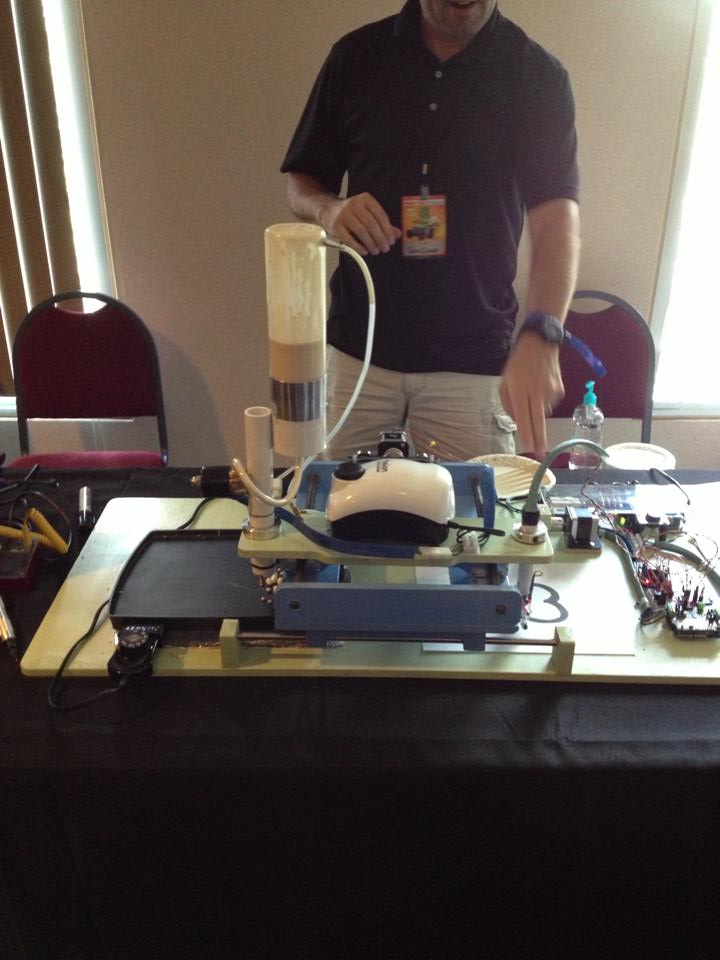 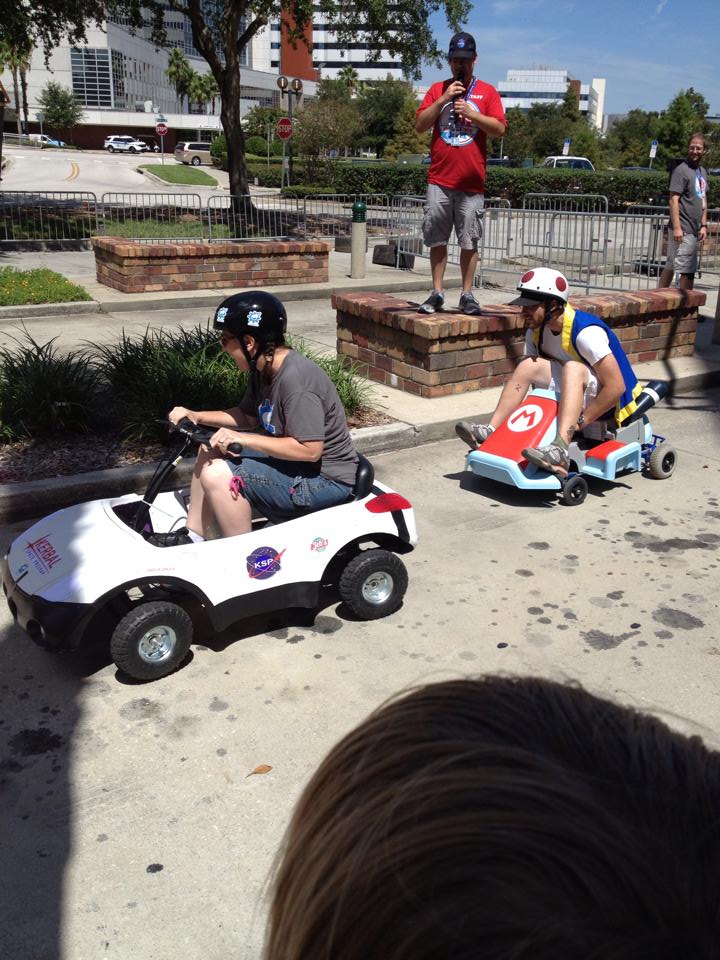 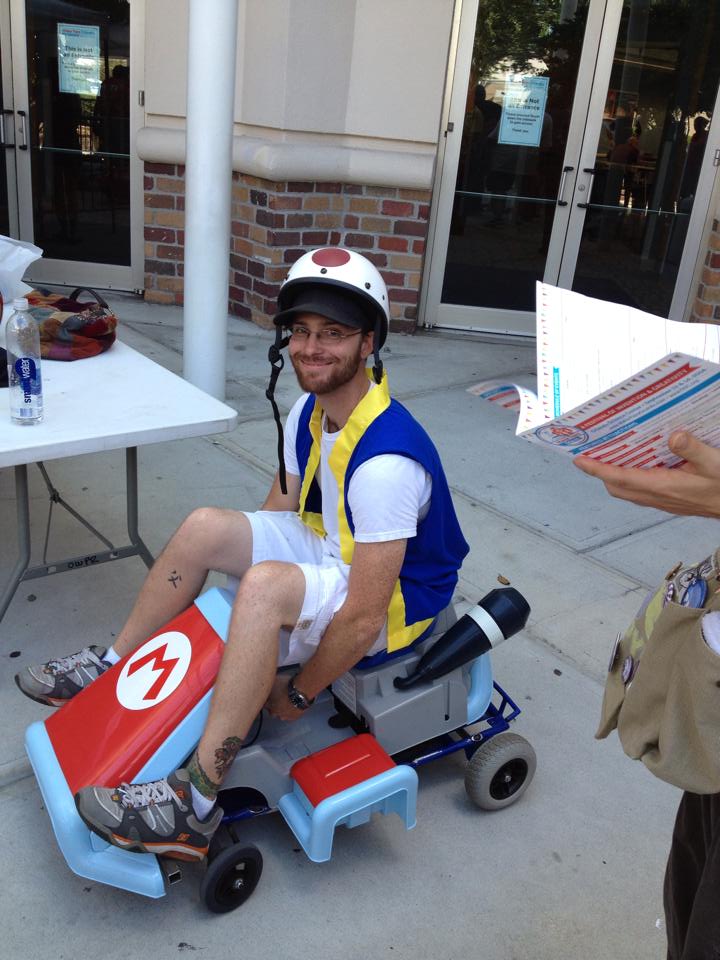 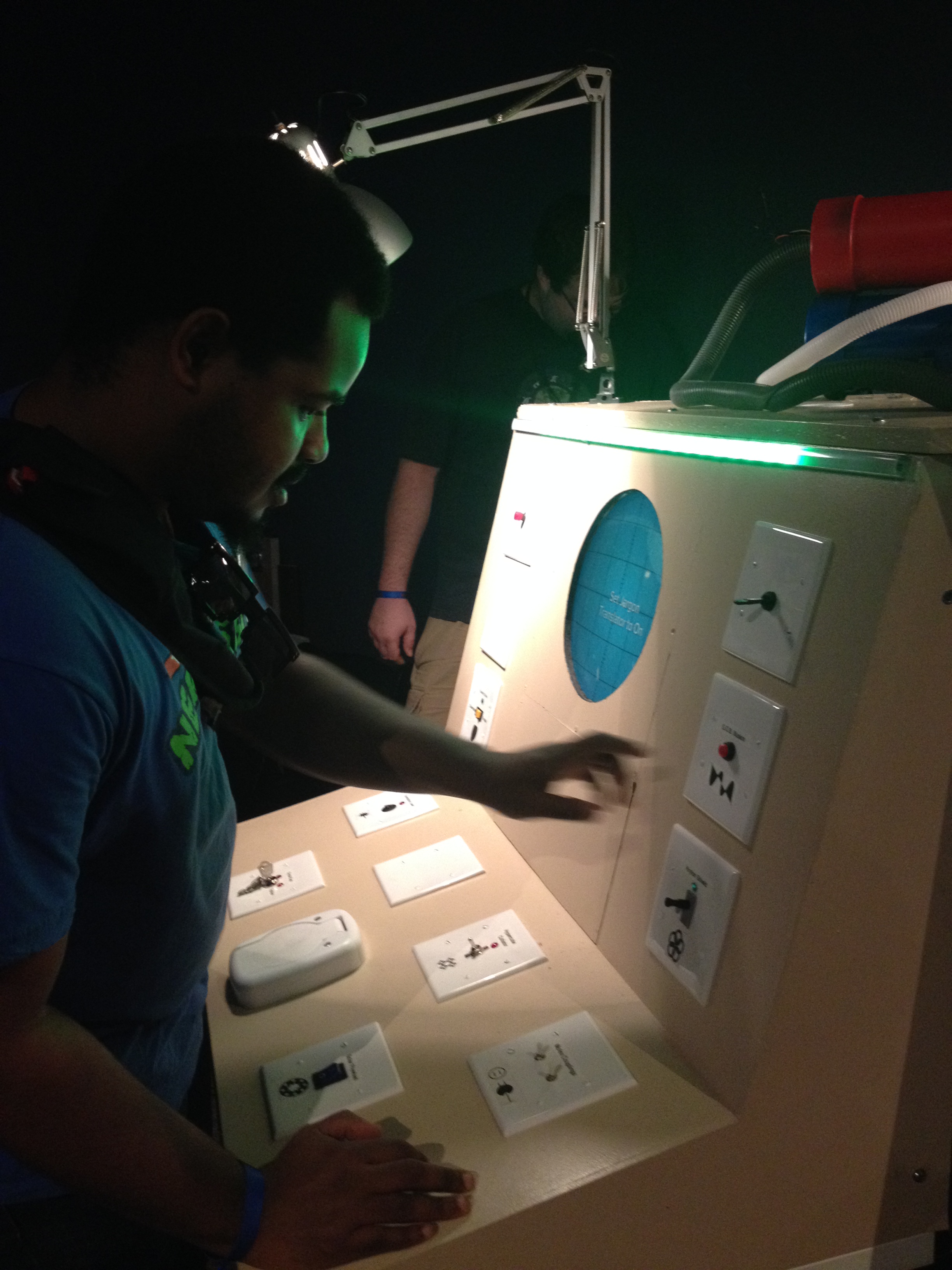 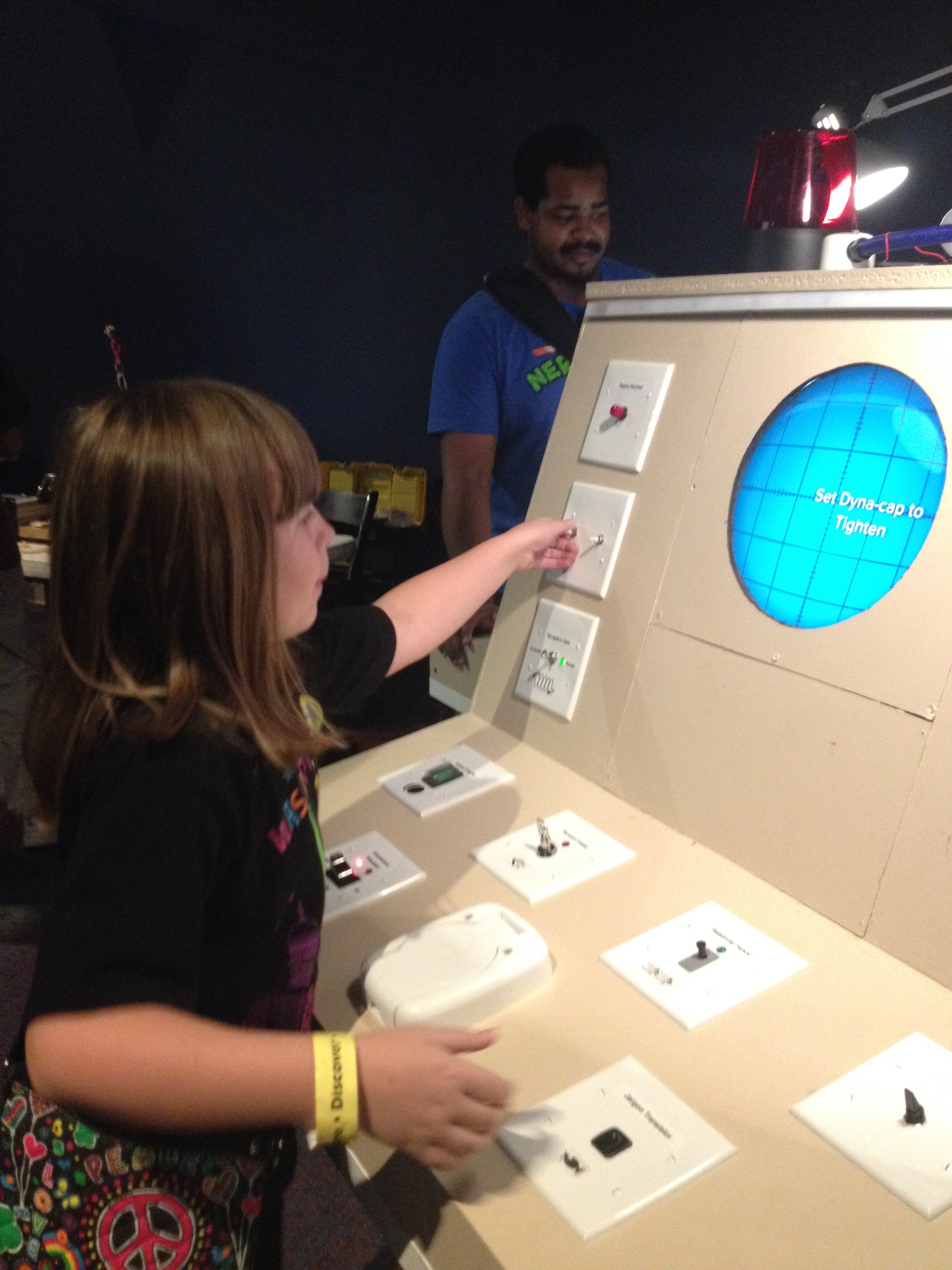