Posted by NerdyShow on September 1, 2014 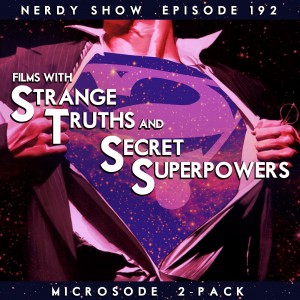 We’ve mashed two fan-chosen topics together! For this Microsode 2-pack we’ve selected topics with a cinema-slant: “Superhero Stories in Disguise” and “Movies Based on Strange Truths”.

Join Cap, Hex, and Doug as they read between the lines of movies and look behind the scenes as to the unusual circumstances they were inspired by. What films, despite not being branded as “superhero movies”, feature great powers and great responsibilities beneath their unassuming facades? And what unusual stories from paranormal encounters, to killer wildlife, and super science have inspired awesome movies? The crew gives their top picks, maybe you have a few!

We also announce the Microsodapalooza – an upcoming live event where we’ll be taking on our backlog of programming in one mighty blow! It’ll be part of a week of live events in September including the Dungeons & Doritos call-in event the D&D Q&A! Plus – Cap and Doug talk about how Nerdy Show is becoming a hub for Ghostbusters roleplaying!

Thanks to M and BigBadShadowMan for the awesome Microsode topics.

Discuss this episode on the forums

“Movies Based on Strange Truths” Links: