Comic Books… I Read Them – Week of September 3rd

Any hope I had about the DC wide crossover of the Futures End story line being nothing more than one-shot single issues has been crushed under the sheer weight of this monumentally bad idea called Futures End. I am REALLY going to do my best to take each issue as it is presented and not let my passionate dislike for the Futures End storyline cloud my judgement. In all of my reviews for DC please bear in mind that everything is happening “Five years from now“. Also, every time I type the words “futures end” just know that a little piece me dies. WELP let’s get to it.

Cloaks #1 :: I am going to admit right up front that I might have an incredibly huge bias going into this book. When I am not reading/judging comic books, I am a magician by trade. This comic book is about a magician. What I hate more than anything else are writers who have never performed a trick in their lives writing about the life of a magician. Movies, TV, Books – they ALL get it wrong – but every now and again someone really gets it right. This book gets it right. David Henrie’s writing is just fantastic! It is a tad formulaic but I’m just chalking that up to the fact that it is only the first issue. It’s got action, it’s got hijinks and most of all – for me at least – it gets the “magician” idea right. It’s a modern day Robin Hood story with a sleight-of-hand twist. BUY IT 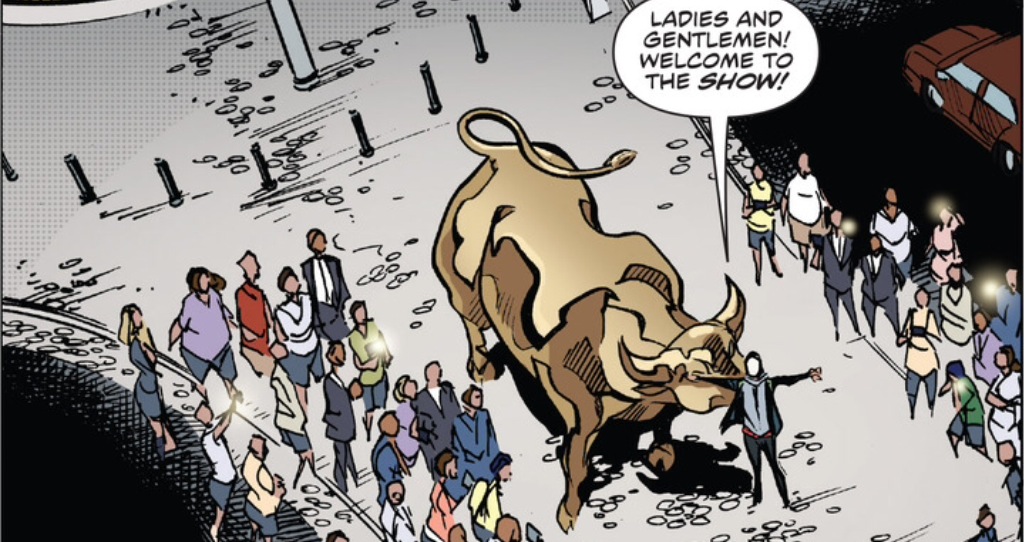 Action Comics #1:  Futures End :: Here we find a Clark Kent who is either powerless or choosing not to use his abilities but still doing the best he can to help people anyway. But the thrust of the story is about three random people each getting a single “Superman” ability and the choice they make as a result. It’s a good issue – it actually reads a lot like an issue of Astro City – and I mean that in the very best of ways – but the plot feels very rushed. Just as each story gets interesting it moves on to the next thing. I’m intrigued, and I’ll be reading the next issue, but I’m not getting my hopes up. BORROW IT

Aquaman #1: Futures End :: Atlantis is in ruins, it’s people are just barely surviving, there’s civil unrest, and  a plan to overthrow the crown and Mera is leading the charge. I liked this issue. Admittedly, there’s a lot going on here and it’s a bit daunting to put the pieces together but there’s some genuine social political stuff happening on top of the underwater battle beat downs. BUT IT

Detective Comics #1: Futures End :: I gotta admit… This issue is pretty good. Despite the fact that everybody is talking about things that we “the reader” don’t know yet (Arkham Island?!?) because it’s “five years from now”, this is a very solid issue with a great story and a clever – if somewhat of an out-of-character – twist at the end. It manages to link together the events of Zero Year and Calendar Man. Plus Batman gets a new Batsuit. Surprisingly the art is excellent here – it’s surprising because three people drew it. Whether by accident or by design, the art styles of Fabrizio Fiorentino, Scott Hepburn, and Cliff Richards complement each other very well. BUY IT

Earth 2 #1: Futures End :: I have no idea what’s going on in this issue. I know who the characters are… sorta. I know it takes place mostly on Earth Prime… Or one… Or ours… Or whatever. I know it has something to do with the Futures End story line. But that’s it. For the very first time – as a long time DC Comics reader – I have no idea what is going on. This issue will be impossible for new readers. LEAVE IT

Grayson #1: Futures End :: This issue was wonderful. It is really, really good. I certainly had problems with Tim Seeley’s writing on the first two issues but – and I’m not sure what Tom King did – in this issue, the story hits the target with a fantastic bang.  It’s told in a Memento style – the first panel is the shocking cliffhanger and it goes backwards in time until we see acid being used on trapeze ropes. I was certainly caught off guard by how good this was. It’s smartly paced and filled with surprises. BUY IT 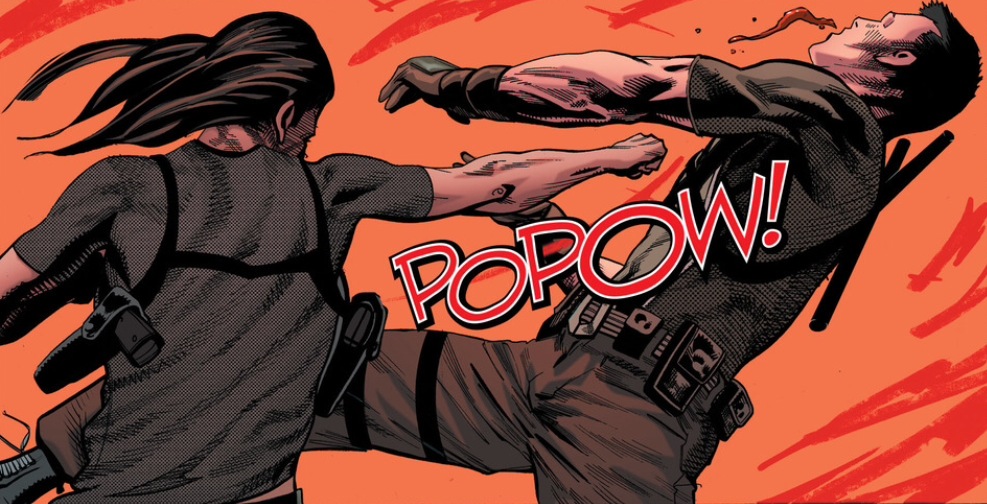 Green Arrow #1: Futures End :: Jeff Lemire’s writing is on point with this issue. A great story with wonderful links to the weapon clans of the Outsiders and we get the return of Shado to boot.  If there was any book to come out swinging in this Futures End crossover it was going to be Green Arrow and in that regard, it does not disappoint. BUY IT 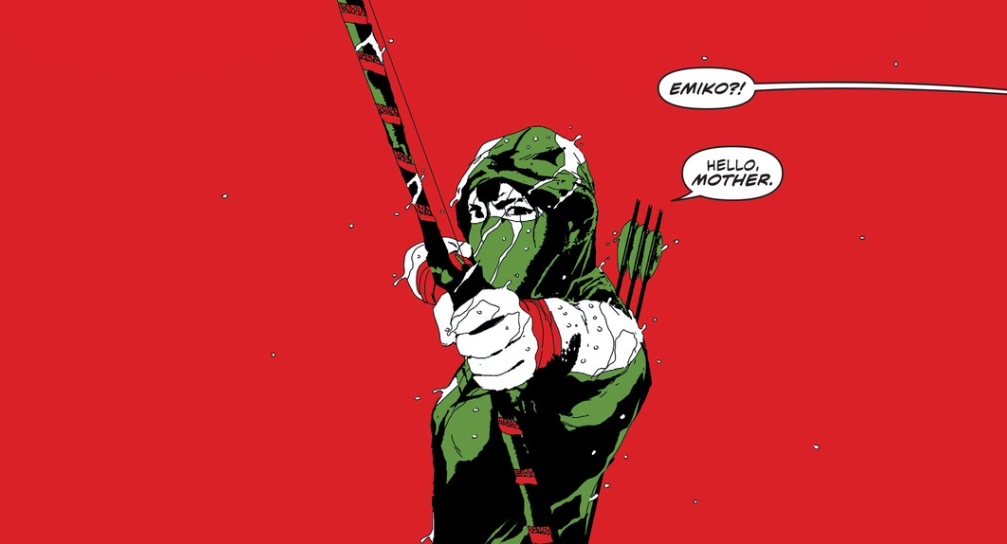 Justice League #33 :: This issue picks up right where the last issue ended with Power Ring out cold and the crazy Doom Patrol leader doing crazy things. But mostly this issue is about Lex Luthor and him wanting to be in the Justice League sooooo bad. This issue is… Ok. It’s not bad but the first half of the book is just lacking in any depth. However, the second half is great! We get some fantastic dialog between Batman and Lex and a wonderfully touching scene between Batman and the big bad villain of this issue. Overall, the whole thing feels uneven but it’s still worth a read. BORROW IT

The New 52: Futures End #18 :: After 18 issues and just under a dozen crossover titles… This story is just now starting to finally make some sense. But unless you’ve been reading all along, picked up and read all of the crossover titles – all of it still feels like a convoluted mess of subplots and dragging narrative. Maybe I’ve just gotten too jaded and cynical at this point but I’ve already checked out of this story five issues ago.  LEAVE IT

Swamp Thing #1: Futures End :: Charles Soule’s writing here is simply wonderful. This is the kind of story telling that has made Swamp Thing one of my favorite DC books month after month. I have no idea what this has to do with the Futures End crossover but we find the Green Knight on the start of an epic quest where we meet old, new, and very new frienemies. BUY IT

The Squidder #3 :: This book manages to be both Goth and Metal at the exact same time… And that is just brilliant! This story is so good and this issue in particular is layered with so much detail. A lot happens in this issue – we get some back story on what really happened to The Squidder’s wife and child – we get to see a squid temple – our hero gets a new sword in the single most amazing and disgusting way possible and I loved it! This is a must read. BUY IT

God Hates Astronauts #1 :: This book is both written and drawn by Ryan Browne. It is also the second chapter – or rather a continuation of a book he wrote last year under the same title. I’m not quite sure how the say this… This issue is horrible. I don’t think I’ve read a comic book as bad as this before. The art is great! Very expressive and over the top. But the writing is just awful. The dialog is pedestrian. The script is cliche. The jokes are nothing more than sophomoric attempts to shock and just end up falling flat. The best joke in it is about chicken fucking and it’s just not funny. It’s like it was written by a twelve year old who only knows one joke where the punch line is chicken fucking. This is not good. In fact, I hate it so much… I wish I could return it because I want my $2.99 back. LEAVE IT 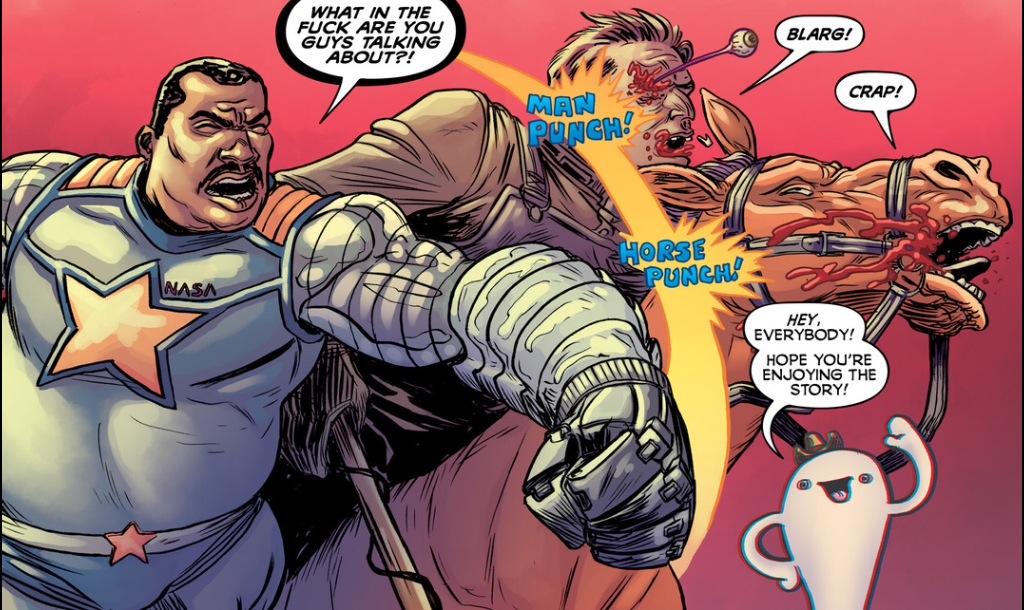 Moon Knight #7 :: I was a tad concerned about what would happen when Warren Ellis ended his run on Moon Knight. Those first six issues are pitch perfect. With the arrival of issue seven written by Brian Woon those fears have turned to hope and joy because this issue keeps the tone and pacing we all have come to love. Moon Knight is a bad ass – an exasperated bad ass with a giant white prop-propelled flying drone. It’s cinematic and funny and filled with high stakes tension – mostly because Moon Knight is a crazy person and I never know what he will do next. BUY IT

She-Hulk #8 :: Charles Soule is on a roll this month because this issue is great! This issue we find our favorite green skinned lawyer taking on a case huge case for a huge client. We get none of the silliness of the last issue but instead we get a story about a possible wrongful death suit against Captain America. It’s fun and funny and really well done. The “twist” ending was weak – I could see it coming a mile away but beyond that, it was wonderful to see the story develop to get there.  BUY IT

The Names #1 :: I like this book a lot – but it’s going to be hard to put into words exactly why I like it. This issue is a whole lot of set up, with just enough exposition to keep me from being confused. The pacing is great and the art is fantastic. Leandro Fernandez has a great eye for detail and every character is perfectly portrayed. It’s an almost anime… Kinda curvy art style that I personally like a whole lot.  The story, seems – at least at first – your standard trope of secret business/organization/illuminati kills a man that kicks off the high stakes take down by the tough as nails bass ass hero. Except that the bad ass is a tough as nails kick boxing woman who has no idea what’s going on and is finding out just as the reader outs. There’s a scary/creepy fight scene that left me rooting out loud for the lady hero. I’ll definitely be picking up the next issue. BUY IT 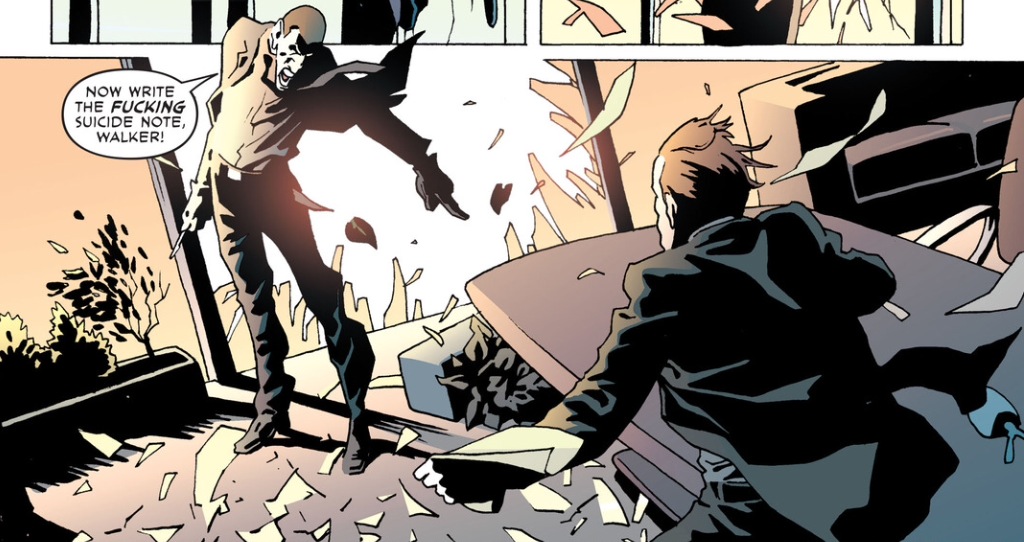