Comic Books… I Read Them – Week of September 10th

This week I push through the craptastic crossover event that is DC’s Futures End. However, there is good news too, there’s not one BUT two alternative westerns from Image this week to look forward to, as well as some really satisfying Marvel, and a sexy spellcaster to boot. Let’s get to it!

Hexed #2 :: This book is my jam! A magic wielding, spell casting hottie who battles ghosts in the afterlife to save an intern she barely likes – as well as the big bad guy getting access to the basement vault that holds all of the most dangerous magical objects. Great stuff. Also, the art by Dan Mora is really spectacular. My one and only nitpicky note is that there are no ethnic people in the world of Hexed yet but then there are only five characters so far. BUY IT

Batgirl: Futures End #1 :: I have always known that Batgirl is a tough-as-nails bas ass. But apparently, “five years from now” Batgirl becomes a super-major, next-level kind of eats-nails-for-breakfast bad ass. As much as I really hate this crossover – this issue rocks and I like this story a lot. In fact, I’ll even go so far to say that I would love to see this Batgirl and her world fleshed out even more. BUY IT

Batman: Futures End #1 :: I get that all of these Futures End stories start “five years later” but in this issue it looks like Bruce Wayne ages in dog years. I found this issue to be lacking. It’s a pretty predictable story with an unsatisfying ending. LEAVE IT

Birds of Prey: Futures End #1 :: One of the problems with starting a story with “five years later” is it has the potential pitfall of being heavy on exposition. This is issue’s exposition is SUPER HEAVY. I have generally loved Christy Marx’s writing on Birds of Prey but the stories have been really inconsistent lately. I’m really hopping that she gets her writers mojo back soon. LEAVE IT

Constantine: Futures End #1 :: This issue is excellent! It’s a classic Constantine story with high stakes magic cast by really sketchy wizards. Apparently, there’s a war that has been waged for “five years” now and in this book there’s shady dealings, double crosses, and enough humor to want more from this world – and I mean that in the most wonderful of ways. BUY IT

Justice League United: Futures End #1 :: This issue is just… Lame. Nothing really original about this story at all. I’m pretty disappointed in Jeff Lemire on this one… And I fucking love Jeff Lemire’s work (Go read Green Arrow… Seriously, start at issue 17 and go read it now!). This whole issue scratches too closely to the epic Kingdom Come story. How many times is DC going to go back to that well? Also, polar bears with bear traps for jaws… ‘Nuff Said. LEAVE IT

The New 52: Futures End #19 :: As issues of Futures End go, I’d say that this one is… Ok. But I think that says more about the past 18 issues than it does about this one. LEAVE IT 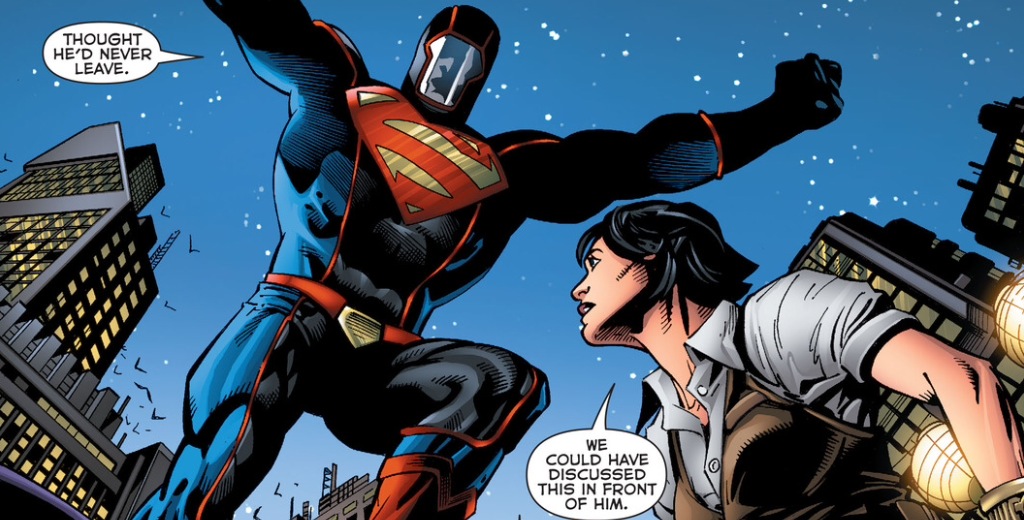 Superman Unchained #8 :: WAIT… DC published a comic book that actually has nothing to do with Futures End?!? BATMAN BE PRAISED! This issue is great! The battle with Wraith heats up for its thrilling conclusion but that’s not where the story ends. I am really enjoying this book a lot. It’s fun to see the two sides to Supes: the all powerful Superman who can do anything and the mild mannered Clark Kent who doesn’t always have all the answers. A great read. BUY IT

Copperhead #1 :: It seems to me that there quite a few comic book westerns currently that have either a sci-fi or supernatural slant to them – and I for one am LOVING IT! This newest title from Image is at it’s core the trope of the “new sheriff in town” story. But what it does differently is so damn wonderful. There is just enough exposition to set a time and place, but it certainly does not give it all away. Great writing by Jay Faerber and fantastic art by Scott Godlewski. This is a fully realized world, a dangerous place filled with characters both alien and familiar. A world that I am excited to explore. BUY IT

East of West #15 :: My favorite new genre of comic book is alternative western and East of West leads that pack. The Nation is at war with the Republic. The House of Mao prepares it’s secret weapons. Death’s son faces off with the three horsemen of the apokalips – while Death himself rides like a bat out of hell to get to him first. This issue was a total nailbiter and had me on the edge of my seat the whole time. So good! BUY IT

Hawkeye #20 :: I have to admit it took me a while to warm up to Kate Bishop and as of this issue I am am now in love with the younger female Hawkeye. This issue is so funny and so packed with comic book shenanigans and yet there is a very serious story going on around it. I’m happy to see the two Hawkeye storylines begin to merge. I was pretty bothered that the book was split between the characters for so long, but after this issue it’s all starting to make sense. BUY IT

Ms. Marvel #8 :: A girl and her dog – her giant mutant teleporting dog. I love this issue. Kamala is really starting to come into her own and owning her abilities and responsibilities to her new found powers. In this issue she gets down to the business of heroing and getting to the bottom of the plans and schemes of The Inventor. Great action, fantastic pacing. Another stellar writing job by G. Willow Wilson and once again beautiful art by Adrian Alphona. BUY IT

Astro City #15 :: This issue is the conclusion of last month’s story. A lovely tale of a delightful old woman and the small army of giant murder attack robots she calls friends. This is classic Astro City at its finest – an over-the-top comic book world but with very human problems and concerns – and Kurt Busiek is in wonderful form here with his writing. I’ve been reading Astro City for years and it’s issues like this that always keep me coming back. BUY IT