Why the Ending of the Divergent Series Sucked

A couple weeks ago, I decided to hop on the Divergent bandwagon. It’s a young adult series, and to be honest, I wasn’t expecting much as the recent film’s trailer put me off, but I found myself pleasantly surprised by the first novel. Things started going downhill in book two, as can often happen, but the finale of the series angered me more than any book has any right to – especially considering I only spent a week and a half on the series. Allow me to indulge in some ranting, and perhaps save you some trouble: here’s why the ending of the Divergent series sucked big-time.

Yeah, there’s gonna be some spoilers. 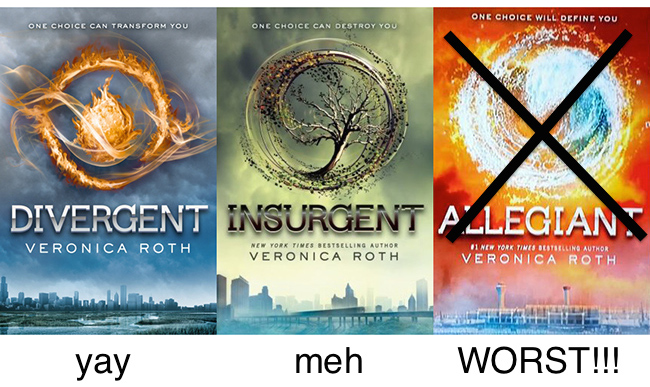 If you’re just diving in, here’s the low-down: the Divergent series takes place in post-apocalyptic Chicago. Humans have split into factions in an attempt to eliminate the qualities of humanity they believe most contribute to war. The “focus” of each of the five factions are: truth (Candor), selflessness (Abnegation), knowledge (Erudite), peace (Amity), and strength (Dauntless). At the age of sixteen, teens are asked to choose the faction where they will reside for the rest of their lives. Divergent begins with the choice of Beatrice (Tris) Prior, who ends up switching from Abnegation to Dauntless. During the choosing trials, she learns that she is “divergent”, meaning that she could belong to multiple factions. This royally screws the system, since the entire society is built on individuals belonging in a single faction. As a result, she must keep her divergence a secret. We find out later that divergent individuals can also resist mind-control serums administered by each faction, and since the leaders must be able to control everyone, the divergent are usually killed.

In all honesty, the first two books in the series, Divergent and Insurgent, do a lovely job of exploring the human experience in relation to love, loss, and survival. But the third book, Allegiant, is like a giant “FUCK YOU” to the reader.

First, let me preface by saying that I really don’t generally ask much from young adult books. I’m not expecting the next great American novel, and I accept a lesser quality of writing as a tradeoff for ease of consumption. But I do have a huge problem with writers who appear to care more about “shock value” and sacrifice character development and logic.

This is precisely what happened in Allegiant. After invoking a truly lame explanation for what caused the dystopian future,  our heroine dies. And before you ask, no, I don’t require a happy ending. But if the main character dies, there should be a really compelling reason.

Here’s how it went down: our protagonists discover that these researchers are going to unleash a serum on their hometown that will erase the memories of all its inhabitants and “reset” the faction experiment. To prevent this, our heroes decide to stop the reset by stealing the memory serum. But to do so, someone has to get past the “death serum” (yes, actual name) and survive long enough to release the memory serum on the research compound instead. (Because there really wouldn’t be any negative ramifications of erasing the memories of ALL of the researchers running experiments in multiple cities.)

Tris’ brother Caleb is originally set to complete the task, but at the last second Tris decides to take on the suicide mission. Since, you know, there’s a slim chance she’ll survive the death serum due to her divergence. Plus, it’s a beautiful sacrifice…or something.

Turns out, after a two-page struggle – she does survive the death serum. Easy-peasy. But when she arrives in the room to release the memory serum, the director of the program (who, might I add, is wheelchair-bound due to an earlier injury) is there…with a gun! Tris is unarmed, and rather than diving for the weapon held by a physically incapacitated director, she decides to dive to release the memory serum instead, succeeds, but gets shot dead.

It’s okay though, because her dead mother appears to tell her she did a good job.

And that’s it. Our heroine dies to erase the memories of a few hundred individuals. We’ll just ignore the fact that reason the scientists were going to reset the experiment was that the U.S. government was ready to come in and shut things down, which everyone agreed would be bad. So, while the means to keep the experiments running was highly unethical, these leaders’ memories have now been erased – meaning there’s no one with authority or competence to make a case for the government to leave the experiments in peace. Therefore, how in good conscience, can I feel satisfied at the main character’s demise? She died for no good reason. In fact, I’d say she died for an incredibly stupid reason and probably caused more trouble than if the reset was allowed to occur. But no, she’s labeled a hero and we’re supposed to feel satisfied that she died a noble death.

Veronica Roth, author of the Divergent series took to her blog and explained why she felt Tris’ death was necessary. According to Roth:

Essentially, according to Roth, Tris had to die because she learned what it was to be truly selfless. But I contest that Tris could have been selfless and survived the incident. There was a transformational moment in the second book, Insurgent, where Tris overcomes her guilt for killing her friend and decides she wants (and deserves) to live. As she faces her own demise, she’s desperately screaming, “I’m not done yet!!”

Where, then, does that desperation go in Allegiant? How, after fighting through the death serum, does Tris still not see the value in fighting for her own life? How does she not first dive for the gun and then release the serum, especially considering her assailant is already at a disadvantage? She’s proved that she has people to survive for, and thinking of those people allows her to survive the death serum. Continuing to fight to survive for those individuals, is far more in line with the character’s growth than simply “learning to be selfless.”

So, sorry Veronica, but I don’t buy your “selfless” explanation. I think that you wanted to make waves and go against the grain for traditional Y.A. literature. And there’s nothing wrong with that – go ahead and kill the heroine. But if you’re going to do it – do it in a manner that justifies her demise.